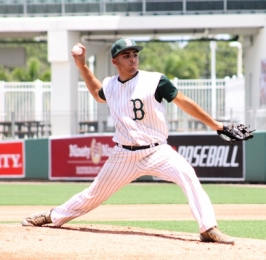 Marco Bolano tossed a complete-game shutout to lead the Panthers back to the 2A state championship.

The Miami Brito coaches preach about the importance of momentum. It is a critical aspect that often helps to lead a team to victory.

In Wednesday’s 2A state semifinal against Master’s Academy at jetBlue Park in Fort Myers, the Panthers grabbed hold of the momentum early on and held it the entire way. Capitalizing on its chances as they came, Brito captured a 7-0 victory to advance back to the 2A championship game.

The Panthers (17-11) will face Bayshore Christian in Thursday afternoon’s title game, after the Faith Warriors (15-4) beat Seven Rivers Christian 4-3 in 11 innings on the other side of the 2A bracket.

The defending-champion Panthers will look to add their second consecutive state crown, and their seventh overall in program history.

“I’m happy, but I’m more happy for the kids,” Brito Manager Pedro Guerra said. “This is the experience of a lifetime for them. We worked hard to get to this point, and I have been lucky to come out here quite a few times and win a couple of championships. But these kids haven’t, so I’m happy for the guys that are here now and for the guys that were here last year. We’re just excited for the program.”

Senior veteran Marco Bolanos got the start for the Panthers, and the right-hander made the absolute most out of his final high school start. Bolanos went the distance for the complete-game shutout, mowing his way through the Patriots’ lineup.

Bolanos is one of 12 veterans who were part of Brito’s championship team last season. Heading into Wednesday’s action the coaching staff relied on those guys to help set the tone for the newer guys who were experiencing that challenge for the first time. 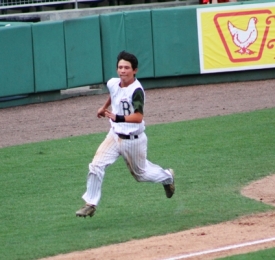 “They tell the newcomers what it is like to come out here,” Assistant Coach David Fanshawe said. “We are expected to win, and especially being out here from a small school like ours we have high expectations throughout the entire year. So they give the advice to the other players, and that is great.”

That veteran presence was showcased from the very start. Facing Master’s Academy ace and leadoff hitter Austin Dean to start the contest, Bolanos prevailed in a nice 10-pitch battle. On the tenth offering Bolanos drew a one-hopper back to the mound for a 1-3 putout that helped set the tone for the day.

Bolanos had his fastball working for him all afternoon, and the Patriots (18-11) struggled all day to catch up with it. This paved the way to 11 strikeouts on the afternoon, including a swinging strikeout against the final batter that wrapped up the game and also Bolanos’ high school pitching career.

“It’s two sides; there is the happy side, but there is also the sad side because I will graduate and leave these guys behind,” Bolanos said. “I’ve been knowing them since I was 11 and they are a big part of my life. Coach Guerra is like my grandpa and David could be my older brother. We just need to come out here and win tomorrow.”

With their ace holding the opposition at bay, the Panthers pounced in the bottom of the second for all the offense it would ultimately need. Bolanos drew a leadoff walk and was replaced by courtesy-runner Willy Santos. Onelio Perdomo jumped on the first pitch he got and drove it deep to the base of the Green Monster wall, allowing Santos to come all the way around and score from first base on the RBI double.

“I saw Marco led off the inning and drew a walk, so I went out there with the approach to move the guy over,” Perdomo said. “I guess I did, because he made it all the way to home.”

The jump-start for the offense came directly on the heels of a big defensive frame for Brito. In the top of the fourth Patriots catcher Justin Horton reached on a ground-rule double off a bloop to right field that bounced up into the stands and out of play. A groundout to Perdomo at first moved Horton to third base, but the next batter was late on a fastball from Bolanos and lined it foul just off first base. Perdomo stretched out and snared the ball for the final out of the inning.

As is typically the case when guys make big plays out on the field, Bolanos and Perdomo then carried that to the plate with them. 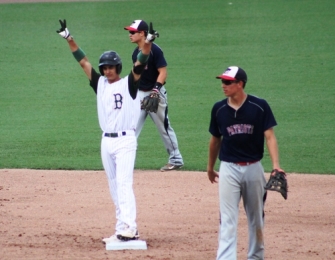 “We’re big on momentum,” Fanshawe said. “As a coaching staff we try to teach them that momentum is big, and especially at this level. You have to keep the momentum on our side, and if you make a couple of bad plays you bounce back. Marco bounced back and made some great pitches and got the momentum back on our side.”

After opening up the lead, Brito kept things going to add on some insurance runs. Catcher Jan Hernandez drew a walk and gave way to courtesy-runner Daniel Castillo, and Richard Nunez dropped down a sacrifice bunt to move both runners into scoring position. Robert Hernandez followed with an excellent bunt single along the first base line, bringing Perdomo across the plate. Christian Alvarez then laid down another great sacrifice bunt on a squeeze-play that scored Castillo to put the Panthers up 3-0.

Brito pulled away with a four-run sixth inning. Jan Hernandez reached on an error and was again replaced by Castillo, and Nunez and Roberto Hernandez both walked to load the bases. Christian Alvarez was hit by a pitch to plate Castillo the hard way, and Ariel Rocha helped put the game out of reach with a liner to the right-center field gap that scored two runners. Alex Nino followed with an infield groundout to the right side that drove home Alvarez and close out the scoring.