Columbus Holds Off Palmetto In 8A Quarterfinal 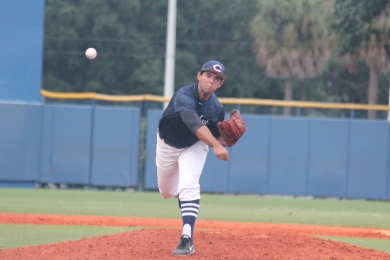 Chris Coipel strikes out eight in the win.

The Columbus Explorers earned a berth in the 8A regional semifinals after a hard-earned 5-4 victory against the Palmetto Panthers that extended their winning streak to 11 games.

For Explorers manager Joe Webber the streak seems irrelevant now that every team is in a “one-and-done” situation.

“Does it?” said Webber when told the win brought the streak to 11 games. “We’re not counting.”

The Panthers jumped out in front in the third inning, stringing together some great at-bats. Michael Roman and Kyle Toister led off the inning with two straight hits, followed by Keaton Zargham grounding out to score Roman after a sacrifice bunt from Karter Nash.

The Explorers answered quickly in the bottom half of the inning, putting up four runs capitalizing on some fielding errors. Alain Santana hit a two-run single, scoring Mikey Navarrete and Danny Casals, followed by another two-run single by Hernan Sardinas, scoring Jackie Urbaez and Santana.

Following the Explorers four-run third the Panthers slowly crept back into the game.

Panther senior Nick Vizcaino hit a mammoth two-run home run to left center on a 1-2 offering that put his team right on the heels of the Explorers again.

“I was just trying to see the ball and hit it hard,” said Vizcaino.

The Panthers again found the fences off the bat of Nash to tie the game on a home run to left-center. 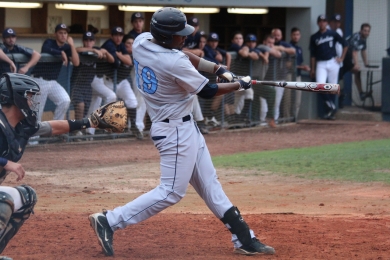 “Our plan was to come in here was to swing the bats and hit the baseball,” said Panthers manager Danny Smith. “We knew that they had two quality pitchers and they threw both of them against us today. We talked about not getting caught looking at strike three, good things will happen if you swing the bat and of course they did.”

The Explorers sealed it in the sixth on a bases-loaded walk to Jackie Urbaez to go ahead 5-4.

Both teams displayed very good arms today. Once they removed their starters, the relievers threw quality innings for their teams to keep them in the game. The Panthers brought in Felix Garcia in the third inning to finish off the game. Garcia threw four and a third innings, allowing a hit and a run while striking out five.

For the Explorers, Webber called on Chris Coipel in relief. Coipel stopped the Panthers threat in the fourth, and after allowing one run in the fifth inning, he fanned six of the next 10 hitters he faced. He finished the day allowing a run on three hits, striking out eight in four innings of work.

“I was thinking about just trying to throw strikes,” said Coipel. “Just trying to get everything down the plate and let my fielders do their job.”

With the win the Explores’ season keeps going and they are now headed to the regional semifinals against the South Dade Buccaneers. Now that every game is important as ever for the seniors because of “lose-and-go-home” scenario, every win is like a breath of fresh air.

“We just take it one at a time,” said senior Danny Casals. “Every game is going to be a tough one from here on out, but it’s good to have practice tomorrow. It’s about the only time you look forward to practice tomorrow.”

The tough loss brings to an end a 15-11 Panther season that exceeded expectations. The team finished second in their districts with a 9-3 record, surprising many teams along the way.

“There were 24 teams playing today,” said Smith. “And we were on of those 24 teams. You have to be happy about that, we’re never satisfied about losing, but like I said before, it’s a team that I didn’t expect this much from and the hard work and dedication they did the way that they played for each other. What do I get from it? I’ve been here 15 years, I had a lot of fun this year.”