Written by Anthony Uttariello on May 1st, 2015 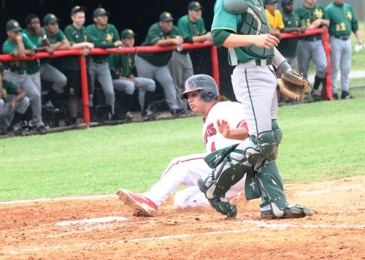 The Nova Titans were a team that came into their 7A regional quarterfinals match-up looking for a signature win in 2015. While Nova has been steady throughout the year, the Titans have not had that win against a top team that could vault them into the state discussion.

That changed on Thursday afternoon when the Titans went on the road and beat defending 7A state champion American 6-3. The win advances Nova to the regional semifinals, where a familiar foe, district rival St. Thomas Aquinas, awaits.

“This team is just an average team that can be above average when they play well,” said Nova Manager Pat McQuaid. “I was pleased with the way they kept battling today, even when things didn’t look so good.”

When things did not look so good was for the first six innings, American jumped on Titans starter Vince Coletti for three runs in the first three innings, and held a 3-1 lead entering the final frame.

In was then that the old Nova magic appeared. Down two runs, the Titans started their comeback with an Austin Davis single up the middle. It seemed harmless at the time, but the single started something much bigger for Nova.

Marcos Villanueva walked, and American Manager Ricky Gutierrez went to the mound and pulled starter Danger Guevarra. The move was suspect to some Patriots fans, as Guevarra had only given up two hits all day to that point, but the always-classy Gutierrez had his reasons for pulling Guevarra.

“He pitched a great game,” said Gutierrez. “But he was at 100 pitches, and I wasn’t going to take a chance with his future just to win a high school game. He is going to college to pitch, and I just couldn’t justify leaving him in at that point.”

Gutierrez instead handed the ball over to Tyler Morales, who was greeted with an RBI single off the bat of Jose Oliva. Suddenly the Titans had cut the lead to 3-2.

After a strikeout, a wild pitch scored Villanueva with the tying run. Javier Lopez was then hit by a pitch, and pinch-hitter Richard Silva was intentionally walked, loading the bases. Lead-off hitter Edwin Pichardo drew a walk, plating Oliva, and a balk brought in Lopez. The final run of the five-run inning came when Shane Rowe dropped a perfect bunt for an infield single, scoring Silva.

“That last inning we were able to put some pressure on them on the bases, something we like to do,” said McQuaid. “Up until that point, we only had one hit, so there was not many opportunities. But they did a good job of executing in the seventh.”

From there, Lopez, who relieved Coletti in the sixth, closed the door on the Patriots in the bottom of the seventh. While Lopez received the win, it was Coletti who went five and-a-third innings and kept Nova in the game long enough for the offense to finally break through.

“He threw the ball well today,” said McQuaid. “They didn’t hit many balls hard. Even though they scored three runs, it was a few balls that got through the infield. So I think he did a great job.”

American had its chances to take command of the game before the Titans comeback.

Mike Montes was at the center of the offense for the Patriots, going 3-for-4, with an RBI and a run. Romy Gonzalez reached base twice, and John Ham three times. But in the end it was the eight runners left on base, including leaving the bases loaded in the sixth, that did in American. 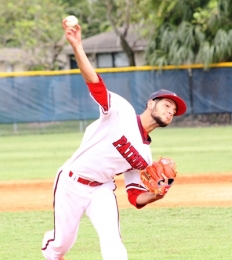 “We left too many guys on base to win at this level of the playoffs,” said Gutierrez. “We had our chances, and we should have had a bigger lead going into that last inning, but we just didn’t come up with the big hit when we needed to.”

Outside of the five-run seventh, the Titans only other run of the day came on a solo home run off the bat of James Spatafora.

With the win in hand, the Titans know all too well what is on deck in the regional semifinals.

“I am glad we get another chance at them,” said Coletti, of facing St. Thomas for the fourth time this season. “I made a few mistakes last time we played that cost us the game, but I will be ready next week. It is always a good game when we face them, and it will be the same next week, but hopefully with a different outcome.”

McQuaid also knows how close his team was in the three games against the Raiders.

“A couple plays here and there, or a big hit,” said McQuaid. “We are not as talented as them, and we have to play a perfect game to beat them. But, I think we are capable of doing that.”

As for American, their season ends shorter than it has the past two years, when the Patriots reached states. The loss, combined with a long tenure as manager at his alma mater, had Gutierrez reflecting after the game.

“I have to sit down and figure out what comes next,” said Gutierrez. “I’ve been the manager here for a long time, and I’ve been a bit spoiled the past two years, but this season was tough. So maybe it’s time to do something else. I’ll figure that out later, right now, I just feel for these seniors. Romy was with me four years, so it’s a tough day to see these seniors go out like this.”