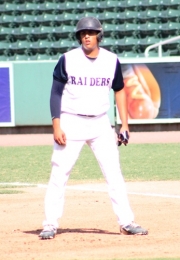 The Raiders fell behind in the first inning and were never able to fully recover in the 4A state semifinal on Monday.

The margin of error this deep into the playoffs is almost microscopic.

After a tough start to the contest, the Gulliver Prep baseball team battled to the end against a tough Bishop Verot squad in a Class 4A state semifinal played Monday at jetBlue Park in Fort Myers. Despite falling behind from the onset, the Raiders rallied to bring the tying run to the plate in the bottom of the seventh inning. Unfortunately, the Vikings were able to record the final crucial out to seal a 4-1 victory.

Bishop Verot (25-6) advances to Tuesday’s state championship against Jacksonville’s Trinity Christian, after the Conquerors downed South Sumter 4-1 in the other 4A semifinal on Monday. Meanwhile, the Raiders see a tremendous season come to an end one step short of the ultimate goal.

“We came out a little flat defensively with the bunt defenses, which is something we’ve been very good at all year,” Gulliver Manager Javier Rodriguez said. “We pretty much had a bad first inning, and Mike Gonzalez threw a one-hitter pretty much after that. Even that hit was a seeing-eye single to right field. We had one really bad inning to start the game and their pitcher threw great. There is no taking that away from him. When you come to this point of the season, to have that one bad inning is terrible. But that is what happened; we couldn’t execute.”

The Vikings put their first four runners on base to start the contest, scoring three runs to take control from the onset. Verot executed several bunt plays to move runners and keep the line moving. The Vikings added an unearned run in the second, before Gulliver (23-7) went to the bullpen for Gonzalez.

The right-hander held the line to limit the opposition to just one more hit and only four more base runners over the final five innings. Even with a deep arsenal of arms at his disposal, Rodriguez never felt the need to go back to the bullpen based on the way that Gonzalez was pitching. Gonzalez struck out six and challenged the Vikings’ hitters, working ahead in most counts and forcing the ball into play.

“I was just trying to get ahead in the count and make them hit the ball,” Gonzalez said afterwards. “That was pretty much it, just stay ahead and let my hitters see what they can do.”

Hits were tough to come by for the Raiders against Bishop Verot’s tough left-handed starter, Patrick Banick. Alex Erro helped the club avoid a shutout when he lined a leadoff single into right field in the bottom of the fifth. Oscar Marchena reached on an error, and Javy Valdes drove Erro home with a groundout to the right side of the infield defense.

Down to their final out in the bottom of the seventh, the Raiders made one final comeback push. Stephan Alonso was hit by a pitch, and then gave way to pinch-runner Christopher Lorenzo. Marchena connected for his second hit of the day with a liner into the left field corner for a double to bring the tying run to the plate. 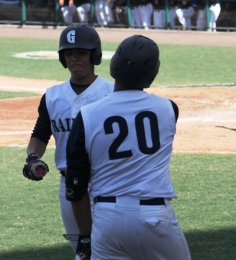 The Vikings went to the bullpen for reliever Thaddeus Ward, who induced an outfield popup to close things out.

“We’ve been in these situations all year, and we have come back in a lot of situations, and won some with walk-offs,” Rodriguez said. “We have lost a couple, too. But either way, I knew we were not going to give up. That’s just not what we do; we haven’t done it all year. Unfortunately, they got the third out.”

Although it is a tough loss for the team, it does little to overshadow the tremendous season the team had. The program has high standards for itself, and the 2015 squad helped to maintain those standards by performing admirably against some of the toughest competition available.

“We have been working really hard all year, and to come up to this point is a huge accomplishment,” Erro said. “We hadn’t been here in a couple of years, but this is a hard-working group of guys. We really had a lot of chemistry and usually we were on the other side of the small battles. Our last two victories have been walk-off wins, but today just didn’t go our way. We just had one tough inning.”