Gulliver Walks Off Against St. Brendan 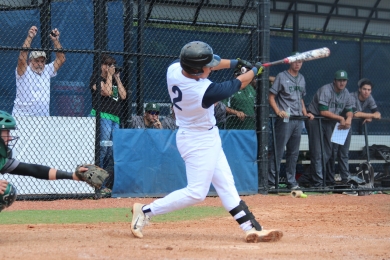 Javy Valdes has a walk-off hit in the bottom of the seventh.

The 4A regional semifinal was a sight of a superb pitching duel between two seniors pushing for another game in their high school baseball careers. Hugo Casillas took the mound for the St. Brendan Sabres against Evan Kravetz and the Gulliver Prep Raiders. Both teams saw themselves scoreless through five and tied at one going into the seventh inning, until Javy Valdes gave his Raiders the victory with a walk-off, bases-loaded hit.

“I felt like I had to do my job,” said Valdes. “Man on third less than two out, I had to lift the ball up. I was just looking for a pitch I could drive and get the job done.”

For the second time in the last five games, the Sabres visited the Raiders, who had a 16-2 record at home coming into the day. History repeated itself again, as it was again a really close game decided by one run late in the action. The Raiders were not fazed from a close game that a loss meant going home.

“We’ve been in so many one run games,” said Javy Rodriguez. “The six losses we have is a total of seven runs, and we’ve won a lot of one-run games. Our guys didn’t look like they were stressed out.”

The Sabres broke the ice in the sixth inning on a double by Ryan Hernandez, on a hit that missed being a home run by inches, scoring Tyler Paige.

“It’s a game of inches,” said St. Brendan Manager Luis Padron. “If you look at this game, an inch for a home run, and an inch when that fielder didn’t get that ground ball, that’s the difference in the game.”

The Raiders quickly responded in the bottom half of the sixth with one swing of the bat. Gio Soto walked up with two outs and sent an offering over the left field fence, sparking up his team and the fans who were back in the game. After Robert Touron left a Sabres runner in scoring position, the Raiders bats were back at it in the seventh. A fielding blunder put Raymond Gil at third base, meaning the Raiders were 90 feet away from the regional final. Four batters later, Javy Valdes drove a pitch against the left-field fence to score Stephan Alonso. 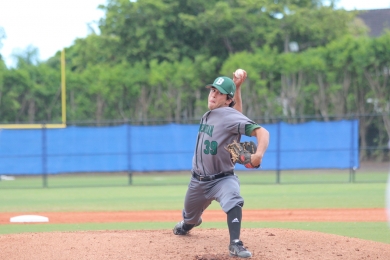 The Raiders rode the start by Kravetz that saw him face 22 batters out of the minimum of 18 possible. Kravetz pitched six innings, striking out three, walking one and allowing two hits and just one run. Robert Touron relieved Kravetz in the seventh, keeping the game tied at one.

“The first five innings I was getting ahead,” said Kravetz. “I was able to keep them off balance and I had great defense behind me. So same thing as always, just trust the defense and everything works out.”

Across the diamond, Casillas established his fastball early, striking out three hitters in the first inning. He finished the game with six strikeouts, allowing only two hits and a run.

“I just hit my spots,” said Casillas on his performance. “My curveball was good today. It helped me a lot and just getting ahead in the count starting the at-bats with strikes.”

The Sabres appearance in the regional semifinal this year surpasses their performance last year, where they only reached the quarterfinal before losing to the Key West Conchs. This year the Sabres say goodbye to 11 seniors who move on into new adventures in life.

“It’s over, you know?” said senior Nico Lares. “Now it’s time to put it behind and look forward to the future. You can’t let it drag on. In these games any one mistake can cost a whole game, and it just showed right there.”