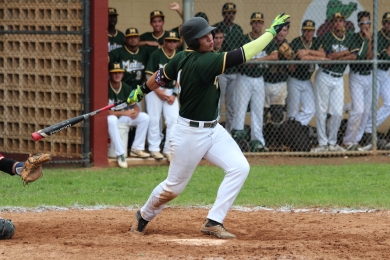 The Mater Academy Lions found themselves in dangerous territory visiting the Goleman Gators with a pristine 14-0 record on their home field before Thursday’s game. The Gators looked to capitalize on their success at home looking for a berth to the second round of the playoffs.

“We felt great,” Gators manager Jose Lopez said. “Being undefeated at home, that’s where you want to play.”

Lions Manager Mike DiRosa was ready for the challenge to defend their 6A state championship against a team with so much success in their home field.

“The game plan is to win, do whatever it takes to win,” DiRosa said. “You have to win one game at a time right now. We just knew we had to come and play our game, execute, play pretty much error free and we can win a game.”

The Lions got to work right away in the opening frame on a RBI single by first baseman Christian Cabrera scoring Tyler Perez to apply pressure on the Gators. Lopez and his Gators wouldn’t shy away for the task of playing comeback. The Gators responded with two runs with a sacrifice fly by Erik Delgado, scoring Fernandez and Thomas Hernandez later scored on a wild pitch to lead by the minimum. Cabrera knocked in more runs in separate at-bats with a groundout to bring in Daniel Reyes and a sacrifice fly, scoring Miguel Escarra. The two big blows came in the fifth and sixth innings on solo home runs by Reyes and Joey Jimenez.

Reyes blast put his team in the lead 3-2 after four innings of the score being tied.

“I was looking for a fastball I could drive,” Reyes said. “I know my first at-bat I was late on the fastball, then I beat one in the dirt, then I felt they were going to challenge me, and then I got it.”

Jimenez’s home run was the Gators fourth run of the day, which proved more than enough.

“When we came in the first inning, we were a little shaky,” Lions catcher Joey Jimenez said. “We regrouped and spoke to each other, drank some orange Gatorade together and that’s it, we found it.”

Tyler Perez worked the final inning for the save. 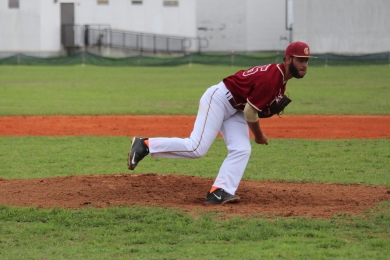 As for the Gators, a long and successful season comes to an end. With a record of 21-4 the Gators showed maturity, improving from a 14-11 mark the season before. With a regular-season undefeated streak at home, and even a 15-game winning streak during the season, one can say the Gators are a formidable team in upcoming years.

“My guys were outstanding,” Lopez said. “I’m proud of them. Once you get to the end of the season, once you get to playoffs, single-elimination games, things get harder. In a one-game situation, anybody wins. It’s anybody’s game. Any little mistake is costly at this time.”

No with the season coming to an end, like every other school, the Gators say goodbye to a big cast of players going on to college.

“It’s sad that it ended like this,” senior Julian Reyes said. “But the ball wasn’t in our favor today, but I couldn’t be more proud of the group of guys I had this season. Those guys were like family. I’ve never seen a group of guys like that, and I’m honored to play with a team like this.”

Lopez is proud of his men but knows it’s time to move on and raise a new crop of talent and make way for the up-and-coming juniors that will be seniors next year.

“My junior class is a very strong class,” Lopez said. “They have to learn form this, sometimes you have to learn to get hit in order to not get hit again.”

The Lions will now face the Doral Academy Firebirds in a rematch of the 6A-16 district final matchup, looking to have a different outcome than their last meeting.