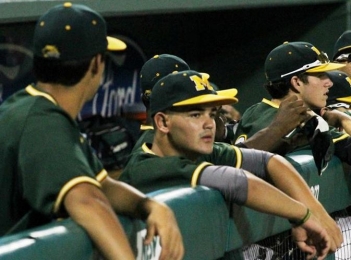 The Lions 3-2 overtime loss ended a special run that lasted over the past two seasons.

When the last bit of magic ran out on Mater Academy’s season, the only thing that Manager Mike DiRosa could do was to thank his guys for the incredible heart and effort they had given. From the guys on the field who played with every bit of heart they had, to the guys in the dugout who cheered and encouraged their teammates the entire way, DiRosa knew he could not have asked for anything more from his team.

Facing Venice in a Class 6A state semifinal at jetBlue Park in Fort Myers on Friday night, the defending 6A state champions battled through an exciting extra-inning showdown. The Indians scored on a wild pitch in the top of the eleventh inning and then held on to claim the 3-2 victory, advancing to Saturday’s championship game while putting an end to Mater’s impressive run over the past two seasons.

The Lions (18-10) won their first state championship in any team sport in school history last year, and they did an admirable job of defending that crown. Facing a tough Venice team that proved every bit as good as advertised, Mater responded to every big momentum swing. Neither side could hold the momentum in their favor for long, as both played with the ferocity and desire of any team one step away from playing in the state championship.

“I can’t express to them how happy I am with how hard they played,” DiRosa said. “Every single game every coach takes their team out and talks to them afterwards. The first thing I did was to thank them. All I ever ask is for them to always give all the effort they’ve got. No matter what the score is that day, give all the effort that you can and I’ll be happy, and you guys will be happy in the long run. Obviously they are not happy today, but I’m very pleased with the effort that they gave. I couldn’t have asked for anything more from any guy on my team.”

Mater took the best Venice could offer, but still managed to answer back to stay in the fight. The Indians drew first blood with a run in the top of the fourth, but were unable to make that slim margin stand up on its own.

After being held off the scoreboard and also out of the hit column, the Lions made the most of their first hit of ball game. With two outs in the bottom of the fifth inning, catcher Joey Jimenez was hit by a pitch and then gave way to courtesy-runner Raul Frias. Shortstop Deyvid Silva jumped on the first pitch he saw and lined the ball into the left-center field gap just short of the 379-foot mark at the base of the Green Monster. Frias raced all the way around the bases and slid safely into home ahead of the throw to even the score at a run apiece.

The Indians (28-3) scored a run in the top of the eighth to jump back in front, but the Lions battled back to stay alive with a run in the bottom half of the inning. Stephan Alfonso drew a leadoff walk and Michael Escarra was hit by a pitch to bring Danny Reyes to the plate. The senior veteran sent a flare into shallow right field to bring Alfonso around to even things back up. 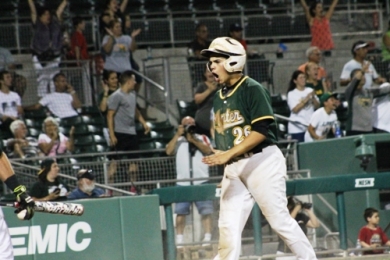 Three more back-and-forth innings were needed to decide the outcome.

“Every bit of effort that I wanted, they gave it,” DiRosa said. “We could have easily folded any one of those times and given up. But they just kept fighting and fighting and they didn’t want to give up. To them it is a credit to the team. We did have our chances to win the game and we had some more chances to score more runs. Credit to their pitchers; they have a really good pitching staff. From those side-arm angles it is really tough to hit. We have a good hitting ball club and it is a credit to their pitching and their defense that they shut us down. It was a bizarre game on both sides, and I am sure that they were frustrated as well that they couldn’t get their opportunities to do it, just like us.”

Mater ace Kevin Fuentes battled against the tough Indians lineup, working into the eighth inning while keeping things tight for his offense. The senior right-hander scattered seven hits and four walks, but held the opposition to just two runs. Fuentes had a tough assignment in matching up across from Venice ace Cole Kragel, but the veteran hurler proved up to the task with a gritty and impressive performance.

Fuentes’ performance was just one example of the effort the Lions produced. This veteran ball club has come a long way over the past few seasons, and none of them wanted to lay down and let it end without a fight. This passionate performance exemplified the standard by which the program has evolved into being recognized for, and for the many seniors now set to graduate from the program this fact alone is their final accomplishment for Mater Academy baseball.

“It started off with the previous coaches like Eddie Gorriz, and he started building momentum and building the program,” DiRosa said. “He started getting people to believe and to win. That was a slow process in the beginning, and when I took over I just tried to continue building towards success. Last year we went into districts and got hot, and this year was a very similar thing. We played a very competitive schedule, and playing those types of games against those types of teams every game throughout the year helped prepare us for a team like this in Venice.”