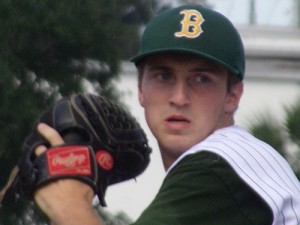 Christian Crowe pitched five and one third innings to pick up the victory.

The Miami Brito Panthers are on their way back to jetBlue Park for the Florida state tournament. In a 2A regional final held at Florida Memorial College, the Panthers used good pitching and sound baseball fundamentals to defeat the Boca Christian Blazers, 6-1 on Friday afternoon.

Miami Brito (16-11) got the lead runner on in four of their six innings and scored in each of those frames. Freshman Alex Nino was the catalyst for the Panthers. The leadoff hitter started things right from the get-go. Nino walked in the bottom of the first inning, promptly stole second base and went to third base on a wild pitch. Nino then trotted home with the first Panthers run when designated hitter Marco Bolano hit a single to right field. Miami Brito never gave up that lead.

“I did what my coach tells me,” related Alex Nino. “As the leadoff batter, my job is to get on base and get things started.”

Meanwhile, Miami Brito starting pitcher Christian Crowe was determined to hold that lead. Crowe worked five and-one-third innings for the Panthers. He recorded seven strike outs, while giving up four hits. Two of the four hits were kept in the infield.

“My goal was to throw strikes, because I know we have a good defense behind me,” Crowe said. “This is my first year here and these guys have taken me in as family. We are a tight team and we play as a group. You saw us as a team today.”

Although he is one of the new guys on the squad this year, Crowe has earned the trust of his teammates and his coaches.

“We expected Christian to come out today and give us some good innings,” Miami Brito Manager Pedro Guerra said. “He is a competitor, he has been waiting for this moment and he stepped up.”

Miami Brito added to its lead in the third inning, when once again Nino got on base. This time he hit a single off Boca Christian starting pitcher Blaize McSweeney’s glove. Nino was sacrificed to second by Luis Nieves, but he did not stop there. With his head up and his momentum rolling, he hustled into third base. That hustle was rewarded with an RBI sacrifice fly by Bolano, to make the score 2-0 Panthers.

Boca Christian whittled into the Miami Brito lead in the fourth inning. Logan Rataiczak drove a single to left field to lead off the inning. He moved to second on a wild pitch and advanced to third on a base hit by Michael Walsh. The Blazers scored their first and only run when Zach Hofmann hit a fielder’s choice to the shortstop.

Marco Bolano drove in the Panthers first two runs in their 6-1 victory.

Miami Brito added two runs in the fourth on a couple of miscues by Boca Christian. After an error and a hit batsman put two runners on, a walk and two wild pitches put two more runs on the scoreboard for the Panthers.

Boca Christian (14-13-1) mounted a rally in the top of the sixth inning as the Blazers worked a walk off of Crowe and then two more off reliever Hector Garcia. The third pitcher of the day for Miami Brito, Richard Nunez, came on and squelched the Blazer rally by inducing an infield pop out.

“With bases loaded we really had a chance,” lamented Blazers Manager Clint Erickson. “If the ball goes a foot higher over the first baseman’s head, we would have had a different ballgame. That fourth inning was tough for us. Letting two runs in on wild pitches put us in a hole.”

Sophomore Michael Walsh had two hits for Boca Christian. Logan Rataiczak was on base two times for the Blazers and pitched three innings in relief.

Richard Nunez came into the bases loaded jam for the Panthers and worked out of it. He pitched a scoreless seventh for the save. Nunez also had a long triple to left field, leading off the bottom of the sixth. Bolano had a hit and two RBIs for Miami Brito, and Nino collected his second hit of the day on an RBI triple in the sixth inning.

“Alex is an explosive player and he runs the bases well,” Guerra said. “He did what we needed from our lead off hitter.”

As the defending state champions and the proud owners of six state title trophies in all, the Panthers have an opportunity to win back-to-back titles for the second time in program history. Brito won the first of its two state crowns in 1996 and 1997.

“We are headed to Fort Myers,” Panther’s Assistant Coach David Fanshawe stated proudly. “We are going to defend our title, and go after lucky number seven.”