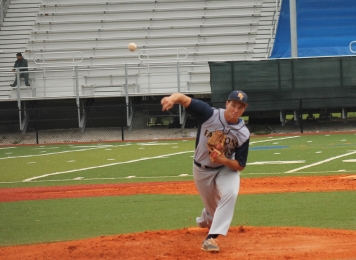 Taylor Walker went the distance on the mound to lead the Falcons to the big victory on Thursday.

The roar of a packed house, the aroma of fresh popcorn in the air, the unilateral pause before every big call; there is nothing like playoff baseball. For visiting Palmer Trinity and host SLAM Academy, Thursday afternoon’s Class 3A semifinal showdown at Gibson Park in Overtown was as special as it comes, as not one player on either roster had ever been there before.

In a historic meeting for both programs, it was the Falcons who prevailed with a 6-3 road win over the Titans. Right-hander Taylor Walker pitched a complete game and the entire Palmer Trinity offense contributed to lead the way to a regional semifinal rematch with Westminster Christian on Tuesday, after the Warriors blanked Hialeah Educational Academy 10-0 on the opposite end of the bracket.

The victory ends the season of a SLAM squad that had come into the playoffs as one of Miami-Dade County’s hottest teams down the stretch of the regular season. While Walker did not dominate the Titans lineup, he pitched effectively and came up with his best pitches when he needed it most. He was not afraid to pitch inside or challenge the toughest guys in the SLAM batting order, setting a tone that the rest of his teammates were eager to follow.

“It’s a really big win because we proved ourselves and we keep going,” Walker said. “A lot of people thought we were going to lose, so it is a good win.”

Palmer Trinity (21-4) was particularly sharp on defense, especially up the middle. Second baseman Coleson Hebble created an early spark with several big putouts in the early going. First he snared a liner to end the bottom of the first inning, then again tracked down a line drive and quickly threw to first to double off SLAM’s first base runner with a 4-3 double play in the second. Hebble also got in the middle of an inning-ending 6-4-3 double play in the fourth.

“We’ve been doing that all year, and we have just been clicking,” Hebble said. “We’ve had this chemistry throughout the year and we have been turning double plays and making plays, and just have had each other’s backs the whole season. It felt good to do that today. This win feels incredible. We are at a school that only got there once before, and it is incredible to do that today.” 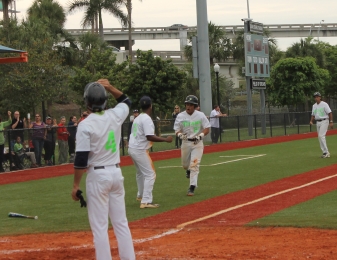 Palmer Trinity did all the damage it needed with a five-run second inning. The Falcons sent 11 batters to the plate during the frame to take control early, while scoring all the runs they would ultimately need on this day.

The Falcons loaded the bases starting off the second. Catcher Evan Steinman got things going with a bloop single to shallow right field, Ted Fernandez drew a walk and Zackary Perkins singled through the left side to fill the bags. Pico drew a walk to push across the first run, and an infield error allowed two more runners to score after Hebble put the ball in play. Blake Miller then broke things open with a shot to deep center field that plated two and made it 5-0 in favor of the visitors.

The Titans (21-7) responded back with a three-run third inning. Shortstop Jeter Downs had a two-out double on a bouncer just fair along the third base line, and Brian Frias then drove him home on a liner over the shortstop. This brought catcher Jose Garcia to the plate, and one of the most feared hitters in the county did not disappoint. Garcia jumped on a 1-1 offering and clubbed it deep to center field for a two-run home run, his tenth longball of the season.

Suddenly that gigantic lead was cut to 5-3 and it was a game again.

“It was tough when they hit that home run, and I got down a little but,” Walker admitted. “But I just had to keep the ball down, and I was messing up and missing my pitches high. So I had to keep my pitches down in the zone. My defense has had my back all season, so I had nothing to worry about with them. I know my team is always going to back me up and it is good to have them behind me.”

Walker settled down from there and only allowed three more baserunners the rest of the way.

As the outs and opportunities ran out, the reality that a magical season was coming to a close ascended upon the Titans. Even despite the sting of the loss, SLAM Manager Alfonso Otero could not help but beam with pride at all his young team accomplished this season. In its first season of district play the team earned the district title and it’s first-ever regional playoff berth. 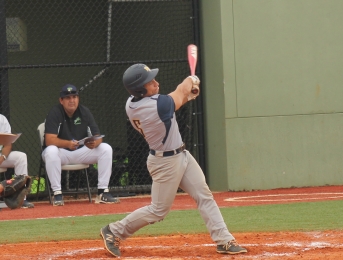 Blake Miller connects for a two-RBI double in the second.

“It is a very young and good team for the next couple of years,” Otero said. “You need to tip your hat off to the opposing pitcher; he really threw well and threw strikes and we hit a couple of balls really hard, but today the ball did not bounce our way. It happens. Overall, I am very proud of this young team and their accomplishments that they made doing the year.”

Palmer Trinity answered back to regain the momentum with another run in the fourth. Pico connected for a ground-rule double to center leading off the inning, Nick Font followed with a single to center and Steinman drew a walk to load the bases. Walker then got clipped by an inside pitch on the elbow to push across another run and give himself more breathing room.

Pico had a big day out of the leadoff spot, reaching base three times on a 2-for-4 performance that also saw him scoring the decisive run.

“I definitely love to be in the leadoff role because you really get to set the tone for the rest of the team,” Pico said. “I think it was in the third inning where they got those three runs and it was a two-run ball game. Then I got it started with the double and that was good to get our bats going again and get us back up and in control. We’ll take that punch, but we’re just going to keep fighting and keep coming back.”

Palmer Trinity had not been to the regional playoffs for eight years prior to this season. Now the club is looking to make history by trying to take down their mighty district rivals in Westminster Christian.

“That is what we have been talking about all season is that we had a good regular-season record, but really it didn’t mean anything,” Pico said. “We got into district play and regional play, and our goal was a realistic one and it was to make it into regionals and make things happen. We got the first game and now we have the next game. We can’t get complacent and we’re going to try and get another ‘W’ and keep going.”