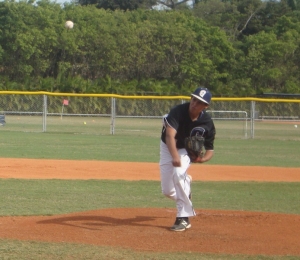 With the game tied 1-1, Gulliver Prep Manager Javier Rodriguez had one thought during a first-and-third situation in the sixth inning Thursday against Mater Lakes Academy in a regional quarterfinal: Let Giovon Soto hit. That’s just what Soto did.

Soto drove in the go-ahead run with a single to center field to bring in Javier Valdes, who got on with a single in an inning in which the Raiders banged out four hits. Justin Fernandez scored on Alex Erro’s sacrifice fly to make it 3-1, which held up as the final score.

“He’s been doing it all year,” Rodriguez said. “He just need to lift one and ended up getting a base hit. I had confidence in him to get the job done.”

The Raiders (21-6), who advance to a regional semifinal Tuesday against the winner of today’s Key West-St. Brendan game, had to grind it out against the Bears, who played solid defense to keep Gulliver at bay.

“We had been hitting the ball well early in the game,” Rodriguez said. “We kept getting thrown out at second. But I didn’t want to stop being aggressive because that’s how we play. It ended up winning it for us when we advanced to second, then third in a throwing error with Valdes’ bloop double.”

Gulliver took a 1-0 lead in the first when Pedro Pages hit a sacrifice fly to score Valdes, who went 2-for-3 with two runs.

The score remained the same until the top of the fourth when Mater Lakes evened it. Gabriel Blanco led off with a walk and moved to second on Alek Sierra’s sacrifice. Cristian Santana followed with a single to center field to bring in Blanco.

Gulliver got a strong pitching performance from Davis Brown, who pitched five innings, striking out seven and walking three while giving up three hits.

“Davis was Davis,” Rodriguez said. “He has been doing it for four years. There’s a guy that has been pitching for me for four year in the playoffs. He’s now 6-0 with an ERA under 1.00.”

Oscar Marchena went 2-for-2 for the Raiders, who are now preparing for Tuesday’s semifinal while not yet knowing the opponent. The Raiders await the winner of Friday’s semifinal between Key West and St. Brendan.

“We need to be prepared for both teams,” Rodriguez said. “They are both very good teams with good arms.”