St. Brendan Comes Back For 3-1 Win Over Key West 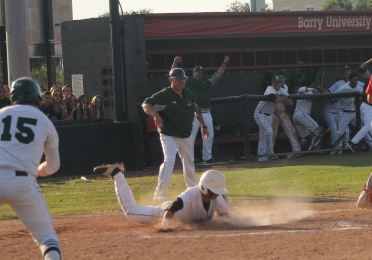 Luis Padron scores the go-ahead run for the Sabres in the bottom of the fifth inning.

Playoff baseball brings an environment that is an incredible challenge to perform within. On Friday afternoon at Barry University in North Miami, St. Brendan’s Andres Fernandez and his teammates faced their greatest challenge of the year in a tough Key West team. Up against a talented and dangerous lineup, a special and lethal opposing pitcher in Conchs’ ace Greg Veliz and a hostile crowd known for their exuberant passion and endless heckling, the Sabres still managed to channel their emotions against those obstacles and find a way to win.

Behind a complete-game victory by Fernandez and some big hits down the stretch, the Sabres came back for a thrilling 3-1 victory over Key West in a 4A regional quarterfinal. The win keeps the playoff run alive for St. Brendan (13-12), setting up a big road meeting at Gulliver Prep on Tuesday afternoon in a 4A regional semifinal.

After struggling out of the chute and quickly falling behind in the top of the first inning, Fernandez settled down and found his zone. The first two Conchs batters of the day walked and Veliz sent a high chopper over third base to drive in Anthony Henriquez for the early 1-0 edge. But Fernandez then went on to deliver a gritty performance through his seven full innings, avoiding any major damage while limiting the Conchs (18-9) to just three hits and three walks. Fernandez struck out four and only allowed one extra-base hit, keeping his guys in the fight while his batters worked to figure out Veliz.

Despite all the static shooting onto Feinbloom Field across both dugouts and both sets of fans, Andres was able to find his inner comfort zone and trust his stuff. He pitched without fear or anger, maintaining his composure and setting the tone for the entire team.

“It was mostly thanks to my team and the fans; they pumped me up even more,” Fernandez admitted. “The fans were telling the other team that they weren’t good enough to take me out, and that was driving me to do more.”

With their pitcher throwing his heart out on the mound, the Sabres hitters rallied in his support with big at bats down the stretch. St. Brendan tied the game in the bottom of the fourth thanks to an RBI double from Gabe San Roman that drove home Nico Lares, who had gotten things going with an infield single on a bouncer that took a funny hop past the shortstop. Cristian Martin followed with a single to left field, and San Roman jumped on the first pitch he saw to send the ball deep to right field for the tying run.

An inning later the Sabres struck again to plate the decisive runs. Leadoff man Luis Padron got it started with a single past first base, and Lares reached for the third time on the day due to an infield error. Cristian Martin worked the count in his favor to drive a 2-0 offering through the left side to plate Padron with the winning run. 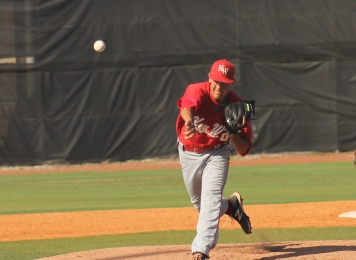 Key West ace Greg Veliz got the start and pitched into the fifth inning for the Conchs, recording five strikeouts.

“I wasn’t looking for a hard shot; I was just looking for something in play and that’s it,” Martin said. “We got the run and then Andres did his thing. I’ve been playing baseball with Andres since we were about nine, and he’s a super good friend of mine. Seeing him pitching like that, I just wanted him to win. All the seniors have really been working hard. We have all been working hard all year.”

Ryan Hernandez was next to the plate, and he too delivered big to give his team a bit more breathing room.The designated hitter jumped on the first pitch he saw and lined it into right field to drive in Lares and double the Sabres’ lead. In such a tight game, the extra run proved huge in creating an entirely new strategy for both sides with their approach to the final at bats of the contest.

“The first pitch he threw me was a fastball. We knew he had pretty good velocity so I knew I had to get my foot down and he just left something kind of waist high on the outside of the plate that I was able to drive into right field,” Hernandez said. “I knew I had to come up clutch, based on the situation that we were in in the regional quarters. I had to come through for my team, and since Andres pitched the game that he had we had to hit the ball. I just got the opportunity there and I was able to drive it in.”

Key West made one valiant effort to change the result with its final swings. Brandon Presley started off the top of the seventh with a double deep to left field, but was stranded there after Fernandez set the next three batters down in order to close things out.

“After that first hit, I wasn’t that worried about it because we were up 3-1 and that runner didn’t count,” Fernandez said. “But after we got that first out, I knew we were already going to move on and go play Gulliver. It’s an amazing feeling, and we’re not done yet.”

St. Brendan Manager Luis Padron has made it his specialty to get the most out of his teams in the playoffs. Just two years removed from winning a state title with Westwood Christian, the Sabres skipper now has the chance to enjoy some new precious moments with his current crop of guys at St. Brendan.

“Look, it’s great chemistry,” Coach Padron said. “You’ve got a senior on the mound that doesn’t throw 95, but my God does he get outs. The guy was our number one to start the season and he struggled a little bit, but then he just came back to be our number one. It’s just a wonderful experience and it’s a great win. Like I tell the kids, don’t celebrate early. One game at a time and don’t get focused on the negative things about the game and about early celebrations; just get the job done. So it’s just great to see this group of kids that are from all over the place to get together and have this run.” 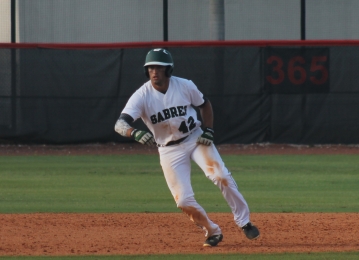 Nico Lares reached base in all three plate appearances, and also scored twice for St. Brendan.

Meanwhile, Key West is left to brush off the dust and begin to work for next season.

“St. Brendan did a nice job and we came up a little bit short. We just didn’t get it done. There is no excuses for it,” Conchs Manager Ralph Henriquez said. “We tried to hang onto that 1-0 lead, but we couldn’t get it done. We didn’t swing the bats well today, and they did. They’re a good ball club and I wish them the best of luck.”

While it is a loss no Conchs fan ever wants to bare, Coach Henriquez could not help and appreciate all that he has gotten from his players this entire season. The program holds itself to a high standard, and again this season the team upheld that standard by making the playoffs and giving themselves a chance to add another trophy to the case back home in Key West.

“Thank God, at least every year I have been here we have been in the hunt in the playoffs,” Coach Henriquez said. “That’s what we expect to do every year. Some years you sing and jump up and down and some years we just have to grab your hat and go home. This year we’re grabbing our hat and going home to start the next season. We lose eight seniors next year so we’ll be a very young club, so some kids will step in and they’ll do well. We’ll be back. We aren’t going to stop working and we aren’t going to stop playing, that’s for sure.”