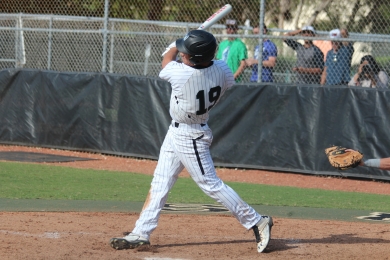 Alvaro Valdez hits a home run in the third inning.

There was one day the Westminster Warriors scored less than 10 runs. That was about three weeks ago. Throughout the season the Warriors eclipsed the 10-run mark seven times, but in the four games of these playoffs they have surpassed 10 runs all four times.

The Warriors erupted for a big day at the plate to storm to an 11-0 win over Palmer Trinity. Westminster Christian will now host Benjamin in a 3A semifinal Friday afternoon.

“The bats are alive and that’s what we want,” said Warriors Manager Emil Castellanos. “You have to play hot baseball at the end and right now our sticks are doing it. All year it’s been pitching and defense and our sticks have been in the back burner, but they’re getting hot now and that’s what you want.”

A home run from Julian Infante in the first and back-to-back home runs from Jakob Zarello and Alvaro Valdez to start the third inning paced the offense.

“I was just looking for a pitch to hit,” said Valdez. “My first at bat I really didn’t get anything so going into the second at bat I was looking for a first-pitch fastball. I found it and just drove it.”

The Palmer Trinity Falcons visited the Warriors in the regional semifinal and found themselves up against a team whose bats are hot at the right moment.

“We knew it was a tall order,” said Falcons Manager Don Harvey. “They’re awful good and for us to beat them we have to play nearly perfect.”

Anthony Vilar added two runs in the second on an RBI single, scoring Valdez, and later followed by a two-RBI single by Clinton Gulley that plated Dylan Cloonan and Vilar. After the two moonshots by Zarello and Valdez in the third, Adrian Mayans doubled in two more runs and Gulley added his third RBI of the night. Michael Arencibia’s RBI double was the last run of the game for the Warriors. 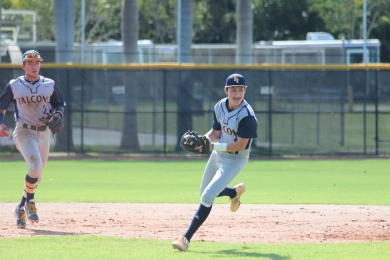 Coleson Hebble makes a play on a groundball.

Even though the bats were on their A-game, the Warriors pitchers combined to allow only one hit. Senior Ryan Terry struck out six, while Jagr Enriquez fanned two to combine for eight strikeouts in five innings.

“I was very confident in what we were going to do,” said Terry. “We’ve beaten a lot of good teams and they beat a good team last week. If we did what we needed to do, which we did, I knew we would win this ballgame.”

The Falcons’ season comes to an end after a 21-7 record coming into Wednesday’s action, and reaching the regional semifinal for the first time in seven years. The 21 wins surpassed the wins from 2012, 2013, and 2014 combined. Harvey looks to keep developing a winning culture.

“We still have our infield coming back,” said Harvey. “And it’s a really good infield, so hopefully that will be our backbone. We’ll develop some pitch during the summer and fall and we’ll see what happens.”

The Warriors are back in the regional finals like last year but looking for a different result. Last year they lost in the final, but now they feel like they are a different team, according to Infante.

“We definitely need to control our emotions a little more than last year,” said Infante. “We were there so we’re a little more mature; we understand what it takes now. We have the abilities to do it and we just need to stay strong and confident throughout the whole game.”