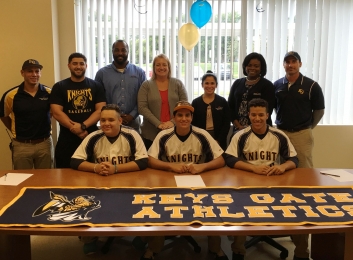 Across South Florida and the nation high school seniors realized their dreams coming true of moving on to play college baseball. National Early Signing Day has become such an important occasion that it has now been extended to encompass a two-week stretch in which senior athletes are able to sign their college letters-of-intent with their respective colleges. Over these past two weeks numerous baseball players across Miami-Dade County embraced this opportunity to make their commitments official.

Florida Christian represented the largest group from one school, as six seniors all signed together during a special ceremony held on the campus. Patriots manager Chris Brigman was overcome with emotion as he spoke to congratulate his guys, and he expressed the pride they brought to the program, and especially in that they are all going to recognized and competitive schools. Brandon Chinea signed with Tennessee, Ruben Someillan with Jacksonville, Christian Coipel at Florida International University, Robert Fabelo with Florida Gulf Coast, Jorge Iza at Fairleigh Dickinson University and Cristian Martin to Broward Community College.

“It’s a relief that everything I worked for paid off. I am going to college and I get to play the game that I love,” Jorge Iza said. “It’s a blessing being able to get an education paid for, and being able to sign along with my best friends is just awesome. It shows that we have talent, and hopefully we perform this year and become a team. Hopefully we win and go far this year.” 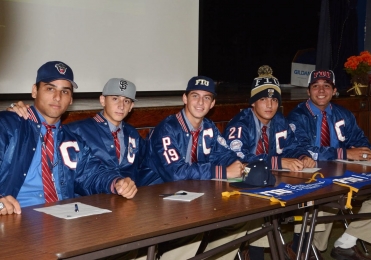 Each program observed the occasion its own way, no matter how large the group. Miami Springs senior Dylan Carter signed with Barry University and later enjoyed a picnic with the team to celebrate.

As exciting as it may be, the entire process of finding the right college fit can also be a strenuous and challenging experience. As each senior lifts that pen and touches it to the paper, there is an unmistakable euphoria that occurs to help wash away all the weight that bore down on them along the way. Any pressure felt is immediately swept away and replaced by the satisfaction of reaching the peak.

Many more seniors will wait until later in the spring to enjoy their chance to sign for college. Numerous underclassmen have also recently announced their commitments while they too await their chance to sign in the years to come. For SLAM Academy junior Jeter Downs, who recently committed to the University of Central Florida, it also marks the first time any baseball player at the school has announced an early commitment.