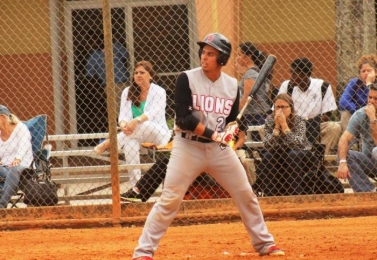 The Lions are eager to get back to the district title game this year.

This new district as as open as any. Of the six squads in this bunch Sagemont was the only one to post a winning record last year, and even the Lions return with uncertainty this season now that the majority of the roster is brand new. For each of the clubs the opportunity to succeed is there and it will just come down to which of them can seize their moment.

“We are going into this district trying to establish ourselves, and the goal is to win it,” said Sagemont manager Ricky Gutierrez. “I think we have a shot. It’s a good district and we have to compete, but I think it’s our opportunity to go out there and try to win it.”

The other clubs are eager to show their growth, and teams like Archbishop Carroll and Dade Christian may have narrowed the gap enough to find themselves at the front of the pack this year. Across the entire span of area from Weston to Marathon there is plenty of reason for optimism and excitement.

“If we keep playing hard and keep working I definitely think we can compete in the district and possibly even win the championship, hopefully,” said Archbishop Carroll junior Alfredo Silva. “District games have a lot more pressure and there is a lot more hype for those games. It’s a bigger stage and you want to perform to the best of your abilities and get that district win, because they are important.”

Now in his second year as the head guy for the Bulldogs, manager Andy Blanco understands that things are still a work in progress. The club struggled out of the gate last year and its first took some time, but by season’s end the club was playing as good of baseball as anyone. Now the goal is to carry that momentum into the new season.

“I think the kids are understanding how important it is for a system to be in place,” Blanco said. “It’s tough when you start a program and you do not know each other. But now it is our second year and everybody is starting to gel and know each other a little bit. So we expect to be a little bit better and a bit more competitive this year.”

It is a strong junior class leading the way, as well as a sophomore group that received a lot of playing experience last season. The team only graduated a few players this year and there are only three seniors this year in Justin Perez, Alejandro Medina and Alex Gonzalez. The junior class is the nucleus of the club driving the guys forward.

“It’s nice to be there to carry the weight and have everybody looking up to you,” admitted junior veteran Jonathan Leon.

Following a successful seven-year run at American High in Miami, one that included a state title in 2014, former Major Leaguer Ricky Gutierrez takes over as the new manager for the Lions. Over that time he had some real good teams and he watched a lot of those talented guys go on to play in college. With the type of baseball talent and mature players the program has typically had at Sagemont, it is a union that should work out very well.

After graduation and transfers bid adios to the majority of last year’s players, the club welcomes a new core of young talent eager to return to the district title game the team won just two years ago.

“I thought about it and I decided to take a chance on a small school, a private school that you have to work and build back up,” Gutierrez said. “It is a challenge for me to try to do. There is a lot of talent and I saw that right away the first day when we started hitting in the cages. It is just the inexperience of playing quality baseball and the challenges that they are going to face throughout the year. We will have our ups and downs in having only three seniors on the team and everybody else being young.”

The leadership from the seniors Stefan Revelo, Niko Leontarkis and Angelo Pagliuca will be crucial for the team’s development. These three all started as young players in the program and they can relate to what it was like for them, and also how the veterans back then helped groom them along.

“Every year it has been a different team and we always lose guys and get new guys,” said Revelo. “Our team is very cohesive. At school we are always together and at lunch we are always talking about baseball. We always come out to try and get better and listen to the coaches. Baseball is all that is ever on our minds. we just love coming out on the field and playing.”