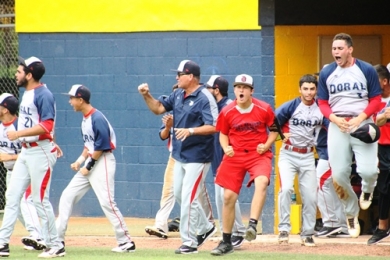 Despite the sweeping changes that realigned districts across the state of Florida, the teams of 7A-16 includes a trio of regular rivals with the addition of an interesting and unpredictable fourth in Miami Sunset. Although the Knights struggled in 2015, it is a squad that has regularly contended in the district under manager Armando Peleaz, while each of the other three squads are coming off strong seasons in which they look to build for bigger and better things this time around. It is anyone’s guess which club will prevail and hoist the district trophy at season’s end.

Doral comes into the fray as the defending district champions, but the team also realizes the tremendous challenge it faces in trying to repeat that feat this year. Even though the district is smaller, the threat each team brings makes it just as difficult.

“If we throw strikes and if we catch the ball I think we will have a lot of success,” said Doral manager Ralph Suarez. “I think this year we are going to score a lot more runs, and pitching is where the question mark is going to be. I don’t know what to expect, and we play North Broward Prep, American Heritage, Westminster Christian, Miami Brito and we are going to Sarasota for Spring Break to play some tough teams over there. We are going to find out how good we are fast.”

Each team graduated a strong nucleus of players this year, and heading into the season there is much uncertainty as to what type of teams they will be going forward. Regardless of the personnel, each squad will have the same goal of winning the district championship.

“We never really try to worry too much about the district,” said Belen Jesuit manager Jerry Albert. “What is nice is that all four teams are good. Every day you go out to play one or the other, you wind up with a very good game.”

The Wolverines might not have had the record that reflected it, but the club was in nearly every game it played last year. Eight of the team’s losses came by only one or two runs, which has highlighted just how small the margin for error was. Belen knows they have the talent to win those close games and this year’s group is focused on proving that.

Some of those losses were simply a result of the tough competition making just one more play than them. But the level of play that they get in their district is something that fuels the Wolverines to keep working.

“We definitely love the competition that they bring with them,” senior Christian Del Castillo said of district play. “They are always game-ready as soon as they step on the field. They work to get where they are at and they give us good pressure. I always really like that when I am playing. It is motivating.”

Firebirds manager Ralph Suarez knows he has a very talented but young squad, and early in the season he expects that they may struggle a little bit. The club is coming off a season in which it won the district championship in Suarez’s first year back coaching high school baseball, as well as a school-record 13 wins in a row. But after graduating 11 seniors the team understands there is work to be done if they hope to repeat those feats. Although the team is young Doral Academy still plays a very tough schedule that will challenge their new varsity starters.

“Hopefully, at the end of the year as we get older we will be ready,” Suarez said. “We are young but we are very, very talented. We even have a seventh-grader who is probably going to hit somewhere in our lineup this year. But we have the leadership of our older guys like Yasel Fabra, who hit .336 for us last year, CJ Calero, who hit .351, and our big transfer in senior Brian Perez, who came over from Ferguson. We’re moving in the right direction.”

The strength of the returning hitters will be expected to help carry the load, and especially early on as the new young pitching staff develops.

“We have been hitting the ball pretty good so far,” said Yasel Fabra. “Our players are hitting the ball far and they are putting more contact on the ball. We are working on our swings everyday and we practice our hitting everyday. We look pretty good.”