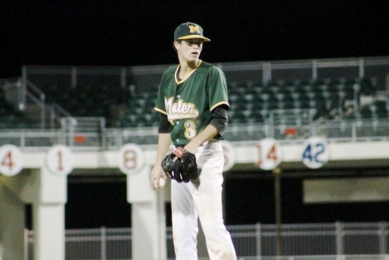 Tyler Perez and the rest of the Mater Academy Lions will be pushing to return to the state tournament for the third straight year.

Mater Academy joins this group following state realignment, and the Lions will have their hands full as they pursue another deep playoff run. The 2014 Class 6A state champions have played in the state Final Four the past two years.

“It’s been a great and unexpected ride,” said Mater manager Mike DiRosa. “We knew we had good teams and could compete for it, and winning a state championship is always a blessing. You set the bar for yourself and your program after that and that is your goal. You want to get back there every single year. It doesn’t mean you’re going to, but that is what you work for every single year.”

With that success also comes a target that brings out the best in their opposition. Battling with a recent state champion is nothing new for Westland Hialeah, Reagan and Miami Central, as the past few seasons they had been in with American.

“They are going to be the favorites,” Westland manager Jose Alvarez said. “They have proven themselves year in and year out. We have to try to do our best and take another step and beat a team like that.”

The Wildcats and Bison are also focused on each other, as they have developed a nice rivalry together in recent years. Reagan swept three games during the 2014 season, including winning the district semifinal to earn the school’s first-ever regional berth. Last year the Wildcats returned the favor by sweeping all three meetings, while also making school history by reaching the regional playoffs for the first time.

Now the two sides expect an equal and challenging battle when they play their two games this year.

“Everything is on the line and you have to give it all you’ve got,” said Reagan senior Christian De Los Santos. “You can’t make a mistake or it could cost you the whole game.”

The goal for the Lions is simple, and that is to win their last game. If they do that it would mean they have won another state championship, something the club is hungry to do. But it is a different group now, with only seniors Tyler Perez and Alex Rodriguez remaining of that 2014 state champion squad.

“You just want to play good enough baseball to give yourself a shot,” DiRosa said. “We have a good group of young guys. They play hard and they work hard. We have to prove that even though we are young we can still compete at a high level.”

Leading the way is the strength in the middle with the ace Perez on the mound and the three-year veteran second baseman Rodriguez running the defense. The offense has traditionally been a strength for the club, and guys like Brandon Dudley, Darian Munoz and Moises Criollo will also play a huge role in the lineup. The biggest strength of this team is their relentless and passionate style of play.

“It’s just about playing hard all the time,” said Rodriguez. “All of our teams never gave up when we were down and we always fought to win the game.”

Rafael Mesa begins his second season as the Bison manager, and having had a full year with the guys now he knows everything is much farther along now. The club fell to rival Westland Hialeah in the district semifinal, but posted a winning season with some big wins along the way. The team gave American its first district loss in over two years, and they played exciting and passionate baseball. Now Mesa is looking for them to all take the next step forward.

“I feel like I have a little better control of the team now and they know how I like to run things,” Mesa said. “I named seniors Christian De Los Santos and Felix Reyes as my captains. They were here my first year and they know exactly how I want to run things, so practice has gone a whole lot smoother. We are a lot more organized this year. I think after all those bumps in the road I hit my first year this year is going to be a lot smoother. That is where we are headed.”

The team is young overall, with a large group of juniors to go along with the five seniors. Last year the club was led by this same nucleus as sophomores, while this year there are just three sophomores on the squad.

“It is a pleasure to be here,” said sophomore Roberto Pena. “I transferred here from Flanagan, so I come in here with a winning mentality. We want to get to districts and win districts and get the baseball team on the board.”

The Wildcats are not ready to rest on their laurels just yet. They are eager for more success, even while they understand what a huge step forward they took the program last season.

“It was huge,” Alvarez said. “This group I have now is one of the strongest we have had in school history and I think we are going to do a little better this year.”

Although the team did not graduate any players last season, overall they are still fairly young. More than half the roster are underclassmen. Leaders such as seniors Brian Lavastida and Giovanni Arriera are setting the example and the guys are eager to follow. Arriera had a breakout season on the mound in 2015, and he is ready to surpass that this year.