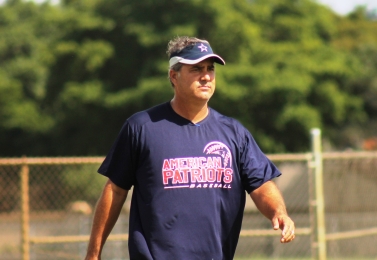 Arby Sosa has returned to lead American against a new group of district opponents.

The American Patriots have been to the state playoffs each of the past three seasons, and won the Class 7A state crown in 2014. Coming into a new district grouping the Patriots are the only team that posted a winning record last season, and they figure to be a big factor in the district chase. But that doesn’t mean they will drop their guard against any of their other new rivals.

The rest of these teams have been battling together for a while now and they are no strangers to one another. The rivalry between Hialeah and Hialeah Gardens is as exciting as any, with two passionate clubs competing for local bragging rights. Although none of the other squads posted a winning record a season ago, the margin of error is small and anyone is capable of making that small jump that could propel them to the top of the district standings.

“I think guys need to focus on just doing their jobs and not trying to do more than they can,” said Hialeah Gardens manager Tino Burgos. “Each guy needs to take care of what they need to take care of pitch by pitch and in each at bat. I think we caught ourselves the last few years trying to do more then what was needed and it hurt us. It’s been really disappointing what has happened in the playoffs the last few years because we’ve had some really good ball clubs. I really think we have a strong team this year and if we take care of the little things I expect big things out of Hialeah Gardens this year.”

Manager Arby Sosa returns to the American program he formerly coached during the late 2000’s, bringing with him 18 years of experienced combined with a love and passion for Patriots baseball. His vision for the team has nothing to do with wins and losses and very little to do with baseball at all.

“My vision for this group is to have them be the best young men that they can possibly be,” Sosa said. “I feel that is my job here and that is my goal. If we win and all the other good things happen then that is great. But I feel like we can’t have that without this happening.”

There was a large turnover on the roster this season following a large senior class that graduated most of the team’s starters. When the former manager also resigned and left the program, the majority of the players opted to stay and support their new skipper rather than transfer out like so often happens in today’s baseball world. The players embraced the new coaching staff and have learn to appreciate the way the coaches respect them and treat them like men.

“It makes us feel more respected as a unit,” said senior Robby Menendez. “We don’t want it ever to seem like it is players against coaches. We want the coaches helping us and making us better.”

Brian Medeiros takes over in his first major stint of his coaching career, and he finds a program that is heading in the right direction and perfectly suited for his brand of baseball. The number of players had doubled this year to roughly 30 players, which allowed the program to field a junior varsity team. Recently Assistant Coach Anthony Nalepa came aboard and that has solidified everything to the point that everyone is clicking on the same page.

“Getting a JV team is very important as far as starting a program that you want to build,” Medeiros said. “The last few years these guys have had different coaches every year and it has been a struggle for them to build that foundation and establish chemistry and trust. Starting with a JV program now it is going to be huge having these freshmen playing and bringing them up through the system.”

The veteran players are excited about what it means for the program. It is meaningful to be able to see the future players who will carry on after they graduate out, and seeing players at the start of their careers helps to inspire them to finish out their own careers as strong as they can. Most of the seniors and juniors on the team started as freshmen on a team with few players and little depth. Although it gave them a chance to play right away, they also had to learn on the field whereas many of their peers may have been able to develop their skills at the JV level.

“You just get thrown in there and you have to make everything correct or else Coach Sullivan is going to kill you,” joked senior Manuel Talavera. “Coach Sullivan taught us back in the day that you have to shake off errors and get back in there. I try to help to teach these guys to shake it off like nothing happened. It’s a brand new next play and that is what I say to try to help kids.”

Hialeah Gardens has never shied away from playing the best of the best and proving they can beat them. This season is an excellent example of that, as the Gladiators are playing one of the toughest schedules in the county. The team has not made it out of the district playoffs the past two seasons, and it is hoping the competition they face will better prepare them to meet that challenge and return to the regional playoffs.

“The idea is to play as much quality competition as you can and try to work out the kinks throughout the season,” said Gladiators manager Tino Burgos.

The team will see some quality arms day in and day out, which will also only make the offense that much stronger. The group is still pretty young overall but has also logged a lot of varsity innings already and the timing seems perfect for them to be challenged more by so many tough hurlers.

“The better the pitching the better the game gets,” said senior Allan Berrios. “Last year we had better pitching so hopefully this year we get our bats going and that takes us to the playoffs.”