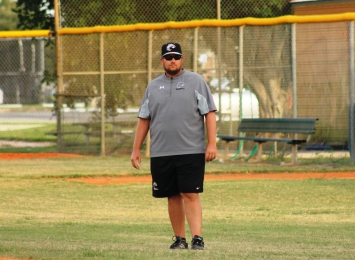 Daniel Barnard takes over as Manager this season, his eighth year with the program.

Typically whenever a new manager takes over a baseball program there is a transitional period for everyone to adjust to one another. Such is not the case for the Ferguson Falcons and their new skipper Daniel Barnard. Having spent the past seven years as an assistant coach under former manager Jose Novas, Barnard is no stranger to the program and the players. Both he and fellow assistant Howard Cuevas also spent the majority of last season at the helm, after Novas had to take a leave of absence due to a family medical situation. Now Barnard is officially the top dog, with his mate Cuevas still right there at his side.

The goal is to get kids to college and prepare both physically and mentally to play the right way at that next level. So the coaches must make sure they keep their grades and test scores up, or they can’t play at the next level. When the first progress reports came out this fall and Barnard saw it was not all A’s and B’s the team had a running session and then followed that up with the best practice they have had in two years. Barnard does not expect any more grade issues, and he expects them to maintain how things have been at practice ever since.

Ferguson returns a lot of starters from last year, especially in the infield. During the fall the coaches are looking towards that leadership to move them through and help make things happen this year.

“I’ve been working with this same group of kids since they came in as freshmen, back when we had the Firebirds doing summer ball with High School Baseball Network,” Barnard said. “So it has been a relatively smooth transition moving over as an assistant. The kids have been great since last year and they made my job easy for me in the sense that they stayed focused and they played hard. They tried to do everything to support me and to support the staff, because they knew Coach Novas was going through some things with his family. Now they have continued that same role going into this year; they are working hard and looking forward to the season.”

The Falcons are coming off a season that ended strong and left the returning veterans hungry to build off of. After winning a district quarterfinal the club battled with eventual district and state-champion Columbus, holding a 6-2 lead midway through before the Explorers mounted a comeback that ended their season.

“Finishing is a point of emphasis for us this year,” Barnard said. “We started rocky last year but ended on a nice winning streak and were playing good baseball down the stretch. We came up short against an extremely talented Columbus team. Not to take anything away from them, but we dropped the ball a little bit there too. Now we are looking forward to getting back and trying to continue the momentum that we created at the end of last year.” 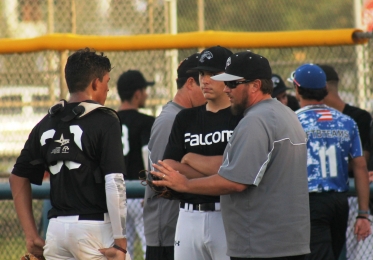 Coach Barnard has a long and positive relationship with his guys, most of whom he coached since they were freshmen.

With eight seniors and six returning starters, the club has veteran experience that can set the tone in the dugout. Coupled with that is a nice mix of talented youngsters who are making the jump from junior varsity play, as well as several transfers who have added more depth. As a unit the guys have already developed tremendous chemistry together and they have shown they work very well together.

“It feels good and you can trust them because you know they’ve got your back,” senior pitcher Jonathan Menendez said. “We finished off good last year and we put up a nice fight against Columbus, and they went on to win it all. We feel good now and we have a lot of talent and experience. We have a lot of chemistry and pitching, and pitching was our weakest part last year. We have choices now with pitchers.”

There is plenty of talent on the staff and guys are helping to push one another. Menendez is a veteran left-hander who figures to be one of the anchors of the staff, along with fellow seniors Christian Chavez and Kevin Tucker. Adding to the mix are sophomores Alejandro Viero and Cesar Reyes, who figures to earn the closer role. Even with all their promise, none of them have logged very many varsity innings and the challenge will be to settle into their roles quickly.

“We just have to keep the ball low and throw strikes and keep us in it,” said Menendez. “I just have to go in there and do my job and do the best I can do.”

The offense returns three of its top four hitters, which should help to take some pressure off of the rest of the club. Seniors Alex Soto, Osmani Perez and Daniel Esquivel and juniors Christian Abad and Raul Delatorre will be counted on to provide the offensive spark and help fuel the newcomers. The lineup is getting a nice boost from some guys moving up from jv, such as Kenneth Diaz and Rafael Gomez, as well as from freshmen Matthew Corpus and Chaz Marte.

“Our key ingredient is our defense,” admitted Barnard. “We have to throw strikes, we have to play defense and we have to scratch out one more run than that other team has. We don’t have five or six guys that can hit it over the fence. But we pride ourselves on playing solid defense and being solid all the way around. Our pitchers throw strikes and we just have to make plays when we have to.”