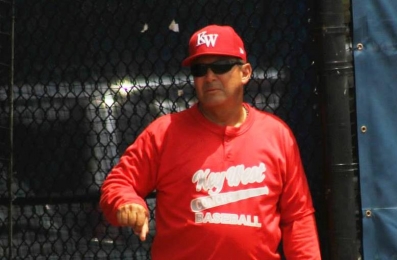 Conchs manager Ralph Henriquez expects his young club to struggle with consistency, but it not lowering the standards one bit this season.

Key West manager Ralph Henriquez admits that his team is very young this season, and that they do not have a whole lot out there that is going to excite the world. But the Conchs skipper knows his kids are going to play hard for the team and they will be fine.

“We’ll win our share of games and we could be a team that sneaks up on people too,” Henriquez said. “We as a group, kids and coaching staff, we do work very hard. No matter what kids we play they know what the standards are and what the expectations here are, and that is to win, go on to the state tournament and win. Even this year, as young and inexperienced as we are, our standards are the same. We are not lowering them just because we have some younger guys this year.”

District realignment shifted things in an interesting way for this club, which now shares a small district with Gulliver Prep and Keys Gate Charter. The clubs will play twice each during the season, and whoever commands the best record from those meetings will earn the coveted top seed in the district. That seeding automatically advances the team to the district championship, as well as securing a berth in the regional playoffs.

“Then the two seed plays the three seed, and whoever loses their season is over and there are no playoffs,” Henriquez said. “So that is pretty tough, but that’s how it is. That’s how we’re treating it and that’s how we’re preparing our kids. Some of them understand it, and some of them don’t quite understand yet what baseball means to this island and this community. But we hope it will sink in at one time or another.”

Missing the playoffs is unfathomable to a Key West program that is tied with Westminster Christian for the most state titles in Florida history. The entire island community provides full love and support for the Conchs, and baseball is an important part of life in the Keys. Many former players are now continuing their education and playing college baseball, but they never stop rooting for the Conchs. 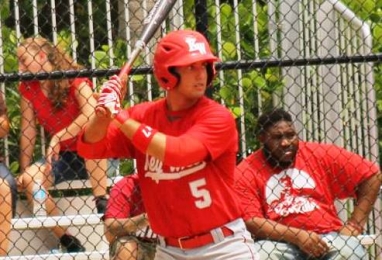 Hunter Sellers is the lone starter returning to the Conchs lineup this year.

This season even the most devoted locals may still need some time to get to know the players, as the club returns only a handful of seniors and few returning starters. Kyle Snow, Damon Taylor, Hunter Sellers and Randy Garcia figure to play big roles at the plate. The offense as a whole is young and still developing, with two promising youngsters in juniors Antonio Knowles and Christian Luna leading the core of the new faces.

Pitching will be where Key West finds the most success early on. Senior veteran Hunter Matheessen figures to assume the lead role, while fellow seniors Hunter Sellers and Patrick Edwards will work in the mix with him. Kyle Irrabino threw well this fall and he’ll get a lot of innings, and lefty Ty Hughes also had a good fall, and he’s a typical left-hander where the ball runs in real well. A lot of time young kids don’t know how to make adjustments with him. They try to pull the ball and he generates a lot of ground balls. The team also plans to give first baseman Kyle Snow a chance to show what he can do on the mound.

“We’re just teaching these kids how to pitch both sides of the plate and how to control that, and keep the fastball down and use the changeup effectively,” Henriquez said. “We use the piggyback system, so we’ll use three or four guys in a game. We have to do that because we don’t have those kind of dominating guys who you put out there and they just go through the lineup three or four times effectively. I hope I’m wrong, but we are just so young and so inexperienced. I also like the piggyback because it keeps the pitch count down, it’s healthy for these kids and it gives more opportunities for some of these young kids to develop.”

The Conchs will play a tough and challenging schedule again this season. Outside of the district they also will face tough squads like Monsignor Pace, Southride and West Boca, as well as some teams from the Tampa area. Key West will head to a tournament in Myrtle Beach, South Carolina, during Spring Break.

“We’re also playing Doral, who beat up on us last year, and we’re bringing them down to Key West this year,” Henriquez said. “We’re not backing down and altering our schedule, but that’s how we get better. We’ll see how the kids respond. We just have to step up and meet the challenge.”