SLAM Is Full Speed Ahead Toward Its Next Milestone 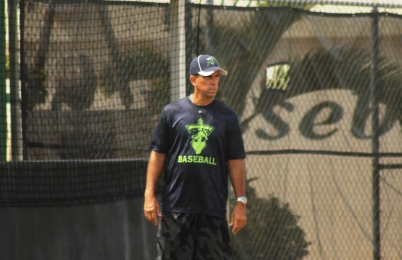 The SLAM Titans are coming off of a special season in which they won the district title and advanced to the regional playoffs for the first time. With nearly every member of that squad now coming back there is a high level of excitement at their prospects ahead this season.

“Last year we accomplished a feat by winning the district and I think it is the first time in the history of Florida that a team first eligible to play in the postseason won the district,” SLAM manager Alfonso Otero said. “We had a great bunch of young guys and we only had three seniors. Basically it was a young core team. The majority of the team are juniors and they are more experienced and much bigger, stronger and smarter, and they are much hungrier to achieve higher goals for this upcoming season.”

The team’s offense put up incredible numbers last year, and all those guys are back this season. Jeter Downs drove in 36 runs, Brian Frias stole 36 bags, Jose Garcia drove in 56 runs and Andres Santana added 45 RBIs. The top few guys in the lineup excelled at getting on base, wrecking havoc by stealing bases and setting things up for the big 3-4-5-6 hitters. It was just an unbelievable year for them all.

People are talking and there is a buzz around the SLAM campus. The young school is quickly developing a strong sports program to identify with, led by the baseball team.

“There are a lot of expectations now leading to this upcoming year,” Jose Garcia said. “From the administration even to the kids at school, they are expecting us to be even better. So it is something that we are excited for and it gives us that motivation and push to reach for it all this year.”

The players respond well to the way Otero runs things, which has led to their success. Garcia notes that practices are a nice mix of business and fun. Otero and his coaches help the guys understand the game in a way that makes it come easily and naturally.

The guys all know how to lock in and focus when they are between the lines, and they play with a lot of confidence that they can all get the job done. The coaches are aggressive in the plays they call and the way they play the game and everyone is accountable for their play. 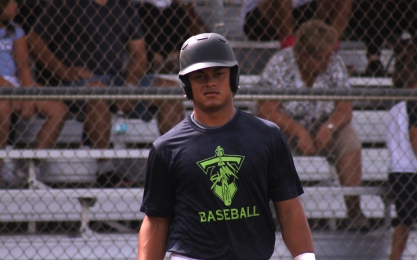 Junior catcher Jose Garcia is one of several key pieces to a potent Titans offense.

“You just have to own up to it and be confident in yourself,” Garcia said. “You just have to have that mentality that every time you are going to succeed, for your team and not just for yourself. It is just that swagger that you have got to have. I tell my teammates to always just be loose, and especially my pitchers. I call it rubber arm where you don’t get nervous and you don’t make excuses. Just be loose and be yourself, both at practice and in games. We practice too hard for that, so jus be loose so the game can come natural to them.”

Otero marvels at how well Garcia has grown into a team captain and a leader. The junior burst onto the scene last year and caught every game for the club, after the team had to scrap the plan to platoon guys when the other starter went down with injury. Usually when a guy catches every day the numbers will go down, and yet Garcia’s just kept going up every day.

As crucial as Garcia and the other guys at the front of the lineup are, the Titans rely on junior shortstop Jeter Downs to serve as that team sparkplug out of the leadoff position. Downs is a key component to the team who has already committed to UCF, who sets the tone for the other leadoff hitters as well as the primary starters such as Javier Comacho, Alex Rodriguez, Luis Garcia and newcomer Luis Padron. That influence is also expected to reach to the new young guys like Joel Quintana, Jonathan Vassallo and Anthony Nunez.

“Although last year offensively we had such a great year, one of the things that I preach is pitching and defense first,” Otero said. “If you don’t pitch well and don’t play defense well usually you are not going to outslug anyone.”

The Titans are as deep as ever on the mound this season. Lefty Juan Osorio has relied on a nice breaking pitch to pull to the head of the pack with right-hander Chauncey Nunez. Senior Blake Brattain has come over from Miami Beach this season to give the starting rotation even more depth, while the bullpen is equally deep with guys like Chris Galan, Conrad Daniel, Ramses Gonzalez, Justin Leiva, Arturo Sardina, Ryan Sablon, Brian Vargas and Luis Espinal.

SLAM is playing its toughest schedule ever this season, as well as competing in a bigger and tougher district. With the pop from the bats and the incredible depth on the hill the club likes their chances to add more chapters to their young history. Now everyone is focusing in and working to make it happen.

“I couldn’t do this if I didn’t have the staff that I have,” Otero noted. “Al Lopez has been my longtime friend and pitching coach for years, and I used to coach his brother at Westminster Christian in 1995. As the year went by we met up. I also have the support of the administration at school: Mr. Alex Tamargo, an ex ball player, and Mr. Rey Breto, who are a great help to the success of the school. Only being our third year the expectations are always going to be high. I am a winner and I like to win it all, and that’s not going to change. If we stay healthy and pitch well, play defense and play the game of baseball the way you are supposed to play it we will have the chance to go all the way.”