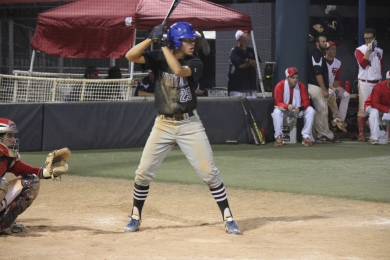 Michael Mejias and the Westwood Christian Warriors are ready to renew some old rivalries this season.

Although the challenge has gotten tougher now, the heavy-hitters at the top of this district are excited by the way state realignment worked out for them. Miami Christian, Miami Brito and Westwood Christian have all enjoyed some memorable battles in recent years. The Class 2A state champion has come right from here for the past three years, and the toughest part of that journey has been in beating these district rivals.

“We’re familiar with the teams in our district, and the last couple of years we have played Miami Christian and Miami Brito,” said Westwood Christian manager Julio Andrade. “We had relative success against them so we feel confident going into the season. We also had to play some really tough teams last year too. It’s not really an advantage but we are going into the season confident in what we can do.”

As exciting as these reunions are, the other teams in the mix should not be overlooked. Colonial Christian and Island Christian are less familiar foes, and in baseball one surprise maneuver could be all it takes for a major upset victory. Champagnat comes from a baseball-rich Hialeah community and the Lions have consistently competed thanks to athletic players with high baseball intelligence.

The Panthers have won the state championship the past two years, but they understand the road to a three-peat will be as tough as ever. The team is not going to sneak up on anybody, but thankfully they return nearly all of their lineup from that state championship game. Some key leaders have now moved on and the biggest challenge will be in identifying who among them will pick up the torch and lead the team now.

“If our team follows the leadership of our coaches and everybody gets along and stays healthy, I do think we can try and make another run for it,” said Assistant Coach Dave Fanshawe. “Everything is possible.”

Depth is better this year and the club has more pitchers it can rely on throughout the season. As Fanshawe states, offense comes and goes from year to year and their bats are expected to groom into shape by season’s end. The pitching and defense will carry the weight all season long.

“Defense is the biggest part of our team,” said senior Richard Nunez. “We practice and if we do bad on defense then we don’t hit. So we have to deserve that practice to hit. It is defense and then hitting.”

This is a very veteran and experienced group led by 13 seniors. The Victors have always been competitive against the teams in their district, and this could be the year they get back to the regional playoffs and make a run. They practice hard and are very vocal during that time, and the communication and chemistry is as strong as ever. The past few seasons have ended for them in tight, back-and-forth contests, and the Victors hope this is the year they make the final necessary adjustments.

“You can’t describe the hunger we have,” said senior Aldo Ripley. “It’s something that you come into the practice and this is what we strive for.”

The team has typically been very balanced and consistent in all three phases of the game. If there is a missing ingredient that they could use, there is the possibility that they may have also found it.

“I have two players who have been with me but haven’t been eligible, and this is their year,” manager Chris Cuadra said. “They make us a lot better with another catcher and a right-fielder who also gets on the mound. We have had good pitching but we have never had go-to guy that shut the door. He’s our guy.”

The past two seasons have been focused on developing a young new group together in a new system under manager Julio Andrade. After winning the state crown the season prior to his arrival, Andrade found the cupboard bare and had to develop a younger group with only few veteran leaders. Now that group has developed and the expectations and aspirations can increase with it.

“I remember states was an unbelievable experience,” said senior Matt Fernandez, the last remaining member of that 2013 title team. “At states when we won both games dogpiling was the best thing. It was the best thing in the world winning states.”

As is typical with smaller schools the biggest challenge for the squad is depth. With only 13 guys on the roster the team must stay healthy and productive. The positive side of it is that everybody knows they are going to play and there will not people sitting the bench dreaming of playing time. Guys learn how to help the team in multiple ways, and many times they will learn to play multiple positions.