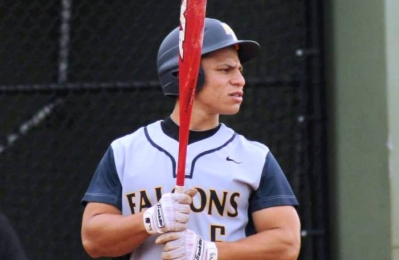 Blake Miller and the Palmer Trinity Falcons are eager build off last season’s success and return to the district championship.

With only one district meeting each, the emphasis to focus and win those district games will be as important as ever. With some heavy-hitters at the front of the pack that includes defending state champion Westminster Christian, playoff seeding will be important heading into the district playoffs. With a larger group that includes three teams that made the regional playoffs last year, the fight for the top seed will be a challenging one.

“We’re probably going to have to go through either Florida Christian or Westminster Christian if we want to get to the district championship,” said Palmer Trinity manager Donnie Harvey. “It’s going to be tough. But before that we may have to beat a much-improved Somerset Academy team, or Coral Shores, who is always an even match for us. We’re not hiding in the mudhole or anything though. We’ll figure it out.”

The way state realignment reshuffled the teams has also brought back of one Miami-Dade’s best rivalries between the Warriors and the Patriots. Dating back seemingly forever these two programs have battled one another, typically with one ending the season for the other. Although they continued to play the past few years even after being separated, the two teams are thrilled to have those meetings count toward the district standings again.

“We call it ‘The Big Rumble’, and it has always been a great rivalry,” Westminster Christian manager Emil Castellanos said. “Every time we play Florida Christian we feel like it is game seven of the World Series. I think they do too. Chris Brigman is a dear friend of mine, but he knows that when the umpire says, ‘Play ball’ it’s a war. At the end, it is great for high school baseball. Since we are hosting districts this year they will play at FLC this season. It’s a good game for the boys to get hyped up for. Then eventually we’ll all come back here and fight it out in districts, but it is definitely going to be nice to see those guys again.”

The Falcons only lost a few players from a very successful team that delivered the programs most successful season in program history a year ago. Although the club must replace integral pieces behind the plate, on the mound and in centerfield. Thankfully there is enough talent remaining to mix with the newer guys in order to fill those roles.

“We’re going to miss those guys, but we have special players coming back and some younger guys who can fill the void,” said manager Donnie Harvey. “I don’t know if we’ll go 21-5 again but we’ll win more games than we lose.”

The strength of the team comes in the defense. Coach Harvey knows he has the best infield defense the school has ever had, and the outfield defense is rock solid as well. After thriving off the offense a year ago the team is expecting this stout defense to set the tone this season. The tandem of senior shortstop Jarrett Pico and junior second baseman Cole Hebble could be the best middle-infield duo in the county.

Versatility also helps on the defensive side, as essentially every guy on the roster is capable of playing multiple positions if necessary. As is often the case with smaller schools that don’t have as deep a student body to get players from, guys on the team know there will be times that they will have to move out of their comfort zone to help at another position.

“During practice we are always switching positions,” said senior Dillon Jones. “I think we have enough experience at every position coach has us at and he won’t put us in a position we haven’t been before. But coach puts us there in practice so we can take that out to the game and step up to compete.”

The Westminster Christian Warriors always say that if you think you are working hard, someone else is working harder. Heading into the season as the defending state champions of Class 3A, the team accepts and understands that their opposition will be gunning for them as hard as ever this season. The time for celebrations has passed and everything is back to business.

“We always go in knowing that every game we play we are going to give a dogfight to whoever we play,” Westminster Christian manager Emil Castellanos said. “Preparing is just another day in giving everything we have got and trying to be the best. We want to be at the top of the hill and you might push us, but we’ll push right back. We compete, we fight and we try to win. Our ultimate goal is to win that last game.”
[KEEP READING]