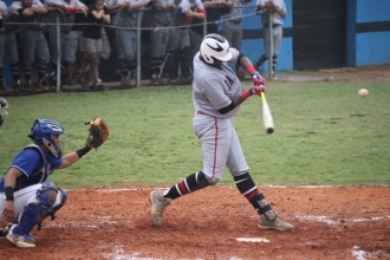 Elijiah Eusebio and the rest of the Cavaliers are ready to swing away against their new district rivals.

Although these teams have not regularly played each other much in recent years, the state realignment actually helped to reunite some rivalries that date back to the early days of the county. As Coral Gables manager Phil Wisser expressed, Miami High is their one and true original rival and they are thrilled to have that back in the district. Each of the five clubs in this group plays the same style of baseball, which should make for some exciting action for the fans to enjoy. The teams play aggressive, passionate and at a very fast pace.

“Those games are the best,” said Coral Gables senior Jordan Morina. “In those games, you really don’t care what you do. You just want to win for bragging rights.”

Each of the five squads will make the district tournament, so the regular-season meetings will be pivotal in establishing the seeding and setting teams in position to advance to the district championship. But along the way baseball fans can expect the type of play that has come to identify Miami-Dade.

Besides just playing for playoff seeding and local bragging rights, those meetings will allow for some nostalgia as well. That is because of another fun aspect of this new grouping that comes in the fact that both Miami Senior and Miami Beach share the same playing field at Flaming Park, a historic location that is only fitting to welcome five of Miami’s older programs. The field that once housed Major League teams during Spring Training still holds much of that aura and atmosphere that fuels baseball excellence.

“Over twenty Hall of Famers have played on that field throughout the years,” said Miami Beach manager Juan Cordero. “So it is a very special place to play in. There is a lot of nostalgia and hopefully some of those guys’ ghosts come out and their spirits embed themselves in these guys to create that fire that they played with. i think it will.”

One year after graduating a veteran group of 15 seniors, the Cavaliers return with a new identity and a lot of new faces. The team had a strong showing last year in making a nice run in the regional playoffs, but now it is up to many new varsity players to learn how to accomplish that same feat and keep the program performing at that same high level.

“It is going to be a different type of baseball that we will play this year,” manager Phil Wisser said. “We will try to find ways to manufacture runs and play small-ball, while trying to learn how to do things right. We really are just trying to get the young guys to realize the whole realm of understanding to the game.”

Wisser will lean heavily on his five seniors, the last remaining members of last year’s group. This includes Elijiah Eusebio, David Webel, David Atkins, Jordan Morina and Tyler Santana. Each is expected to play a ton this year, and each is also expected to be patient and helpful to the many new and young players that will be figuring things out alongside them. There will be a lot more coaching and teaching from the coaching staff that may dress as many as seven freshmen for the varsity games. So the veterans are expected to embrace the whole package of what being a leader entails.

As is typical for the team, they have scheduled a very challenging slate of games that includes many big venues. The Cavaliers will play games against some of the best teams around South Florida in large settings like Florida Atlantic University, the University of Miami, Nova Southeastern and Tradition Field. They will also take a road trip to Louisiana to play some games and also to attend several college games and watch their former teammates compete. The guys are thrilled to be able to enjoy such experiences.

“All of these experience not only helps you to get out there for people to see you but you also get to see new towns and new conditions,” Eusebio said. “Supposedly in Louisiana it is going to be like thirty degrees out. You never know if you have to go to college in Alaska and play in cold weather. It also helps us to bond as a team and get closer to the young kids who don’t open up and talk. When we come back from Spring Break we will be more personal and have more character, and everything just molds us together to make a run.”

Three years ago Rams alum Juan Carnicero returned to take the helm for the program. Knowing their skipper once wore the same uniform as them has helped the players appreciate his dedication, and the guys have really come along now to head in the direction he is looking for them.

“Things are getting better and I feel better after staying around,” Carnicero said. “I feel this year we should compete, do some damage and make some noise. Luckily a lot of the guys that were freshmen when I got here have stayed and I have seen them grow. They are all taller and bigger than me now. They have developed and put their work in to move up.”

Carnicero believes in meeting obstacles head on, and it is a mantra the team is beginning to adopt as well. The Rams struggled on the road last season, and to see where they have come in that regard Carnicero scheduled their first four games away from home as well. The team will find out right away if they have learned to better handle road environments this season.

“I want to battle-test them early so that later on in the year they will have already been through it,” Carnicero explained.

The strength that is fueling the team is the tight bond they have developed together. The core of the team has been together and that grew up in the program. It is a heavy junior class that makes up the nucleus of the roster, and they are as tight as any team before them.

“It is better than ever,” junior Erik Estevez said of the team bond. “We are united and excited for the season to start.”

The Hi-Tides lost a large crop of the roster as well as the manager from a season ago. While many might assume the program will need to rebuild this season and beyond, the team and new manager Juan Cordero feel completely different about their chances. The team has embraced the mentality that it is them against the world, which has them united together and striving to prove everyone wrong.

Cordero and his assistant Rolly Nunez both come over after a long stretch on the coaching staff at Monsignor Pace. They have brought with them the same discipline and traditions that have made the Spartans’ program so successful for so long, and now they look to build that same foundation at Miami Beach.

“We decided to come over to Miami Beach High School and start working on their program to where it is supposed to be,” Cordero said. “It wasn’t that it was bad last year but we still think we can take it to another level. We are trying. Our team, god-willing, will be a team full of guys like Lenny Dykstra, a bunch of hard-nosed players that grind and battle at a hundred miles an hour.”

Everybody has put a lot of work in to help speed things along, since Cordero did not come aboard until late in the fall. The guys displayed their discipline and dedication by the work they put in on their own even before they had a new manager, and that same strong work ethic is driving them forward now. Guys are hungry to prove that there is more talent and ability on the team than the outside world may take note of. The leaders are stepping up and setting the example for the many young guys that are coming in.

“I have only been playing baseball since I was a freshman, and I progressed a lot, so just teaching the young guys what I learned is great,” said senior, four-year starter Gabe Cooper. “I love my freshmen on the team and I love the fire in them. I feel like they are going to be great over time.”

New manager Howard Cuervo is an alum from the school and he was a member of the 2000 state championship team. Only recently hired as the new manager for the Cobras, Cuervo is aided by the passion and commitment he has always had for his school. The team has had to move quickly to get the pieces in place for the start of the season, but being back at his old stomping grounds only continues to fuel Cuervo everyday. The rest of the guys are feeding off of that energy and things are moving along quite well.

“For me it is a dream come true to be a player, an assistant coach and now the manager,” Cuervo said. “I am really proud of these kids. They like to work hard and they are really good teammates. I just got the job last month and from the first day we just started working. We do not have very many players, but we only need ten guys to win a ball game.”

Besides the normal baseball activities, Cuervo has done other things to help create more enthusiasm for the season and for the program. There are not many players at the moment, and many of the guys that did not graduate moved on after the manager left, as is often the case in Miami-Dade. But the guys who are here now are helping to make improvements on the field, in the classroom and in the community, and the goal is to bring excitement back to South Miami baseball.

Guys will be competing for playing time even into the season, and opportunities to contribute will always exist. Especially early in the season everyone will be identifying their roles and how they can help the club. The team is also working to establish and develop their leaders.

“Officially I do not see myself as a captain, as there are many other guys above me too,” said three-year veteran Jared Rodriguez. “But if I need to be a leader I will be and I will just roll with it.”