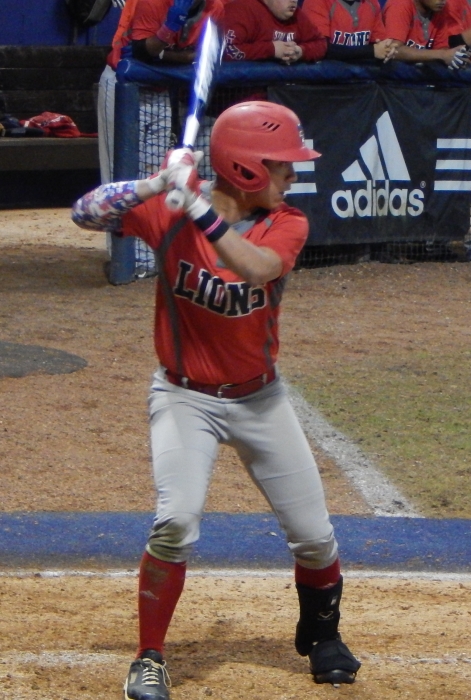 Miguel Fonseca squares up before hitting a home run to right field in the bottom of the first.

Holding on to a two-run lead in the top of the seventh inning with runners on second and third, it was his defense that came through for him. Shortstop Jose Correa snagged a hard hit liner and rifled the critical second out to first. With just one out left to solidify the team’s first win of the season, Valdes struck out the final batter and the Lions won 5-3 against Mourning in Tuesday night’s Adidas Diamond Classic at Florida Christian.

“Sandy is a different kid,” Champagnat manager Enrique Alvarez said. “Sandy knows baseball. He is by far one of the smartest baseball players I have ever coached. He can really finish a game.”

Although Valdes battled through to pitch a complete game, Mourning’s patient approach to the plate and timely hitting put them ahead 2-0 in the first inning. Third baseman Fabian Ortega drove in Max Liff and Marcel Guardarrama with a line drive single to left field.

However, the early deficit did not rattle Valdes for long because his team quickly supported him with a opposite field solo blast to right field by center fielder Miguel Fonseca. Solid defense and pitching carried the Lions to the third inning where the offense exploded for three runs to take a 4-2 lead.

Correa and right fielder Guillermo Fonseca set the table for the Champagnat offense from the top of the order. Both players combined to reach base four times in the first four innings, which resulted in three runs. Fonseca went 2-for-2 and reached base three times.

“Correa has the speed and the ability to get hits,” Alvarez said. “Guillermo just has raw power. He can hit anywhere in the lineup.”

Valdes emphasized how his team’s support on offense and in the dugout helped him keep his head up and continue to fight towards a complete game.

“My team came out ready to hit and that got me back on track,” Valdes said. “I started with fastballs and kept them off balance with curveballs.” 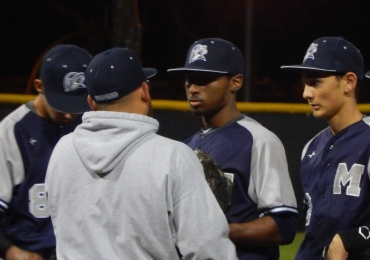 “Game-wise we started strong with two runs,” Bonilla said. “We have a lot of youth and maturity from our freshmen. I praised Varona when I spoke to the team. He came in with a man on third and pretty much got three outs. Jim is one of our best players overall.”

Varona’s clutch pitching prompted the Mourning offense to tack on a run in the fourth due to a Guardarrama line drive single to left field that cut the lead to just one. One inning later, Champagnat tacked on an insurance run to extend the lead. It was the fifth and sixth innings in which Valdes was most effective; he managed back-to-back perfect innings in both frames.

Valdes began the seventh by inducing a fly out to right field, but then hit the next batter. An error put two runners on base and a wild pitch set up Mourning with runners on second and third with just one out. This is when Valdes’s defense stepped in. With the victory just two outs away, Champagnat’s shortstop Correa had one thing in mind as the sharply hit grounder headed towards him.

“All I was thinking was win,” Correa said.

Champagnat’s defense quieted a Mourning offense that managed to outscore opponents 41-2 the first two games last season. Looking ahead to the rest of the season, Alvarez is optimistic about his team’s overall play.

“They played some solid baseball,” Alvarez said. “On the offensive side, we are hitting the ball decently, and our defense is really working out the right way.”