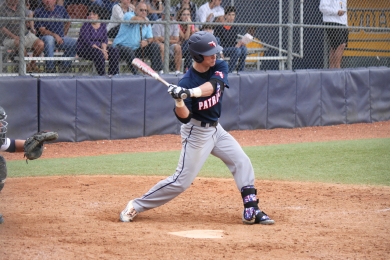 With a packed crowd of fans cheering every hit, giving the game a playoff feel only two weeks into the season, Saturday’s HSBN Game of the Week featured the visiting Florida Christian Patriots 15-6 victors over the Belen Jesuit Wolverines.

“It’s always special when you get the opportunity to play in the HSBN game of the week,” said Patriots manager Chris Brigman.

A tough fight between both teams characterized the game. It was back-and-forth in the early innings with the Wolverines jumping out first and the Patriots fighting their way back. Then the Wolverines again put hits together to retake the lead. But the Patriots just wouldn’t back down and would come back to tie the game until they finally got the lead in the fifth inning and never looked back.

Down 4-2 the Patriots put on a hitting clinic during the fifth with 10 hits including four homeruns, scoring 11 runs. Senior shortstop, Brandon Chinea, led off the barrage with a solo shot to left-field cutting the lead to one, firing up his teammates while crossing the plate as they awaited his run around the bases. Two batters later Robert Fabelo hit an 0-2 pitch to right field with Christian Martin on first for a two-run home run to put his team up 5-4.

“I was just looking for a pitch that I could do something with and help the ball club out,” said Fabelo.

Five hits and a walk later, including RBI singles from Adrien Roa and Someillan, it was Martin’s turn to keep the parade going and he delivered in a huge fashion with a grand slam for a 12-4 lead.

“They were throwing me curveballs all day,” said Martin. “I was thinking right field but he threw me a fastball, left it up and it went over the fence.”

It didn’t take long for another ball to be hit over the fence. Two pitches later Fabelo once again put a charge into one over right field for a solo home run. 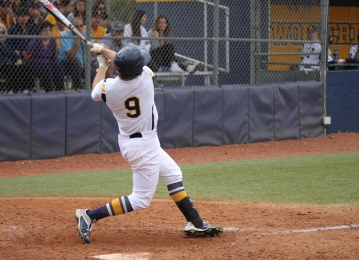 Two innings later RBI singles by Fabelo and Hernandez capped off a busy day for the Patriots at the plate.

“It was a matter of execution off the mound,” said Wolverines manager Jerry Albert. “If you want to win games against good teams, and they have a very good hitting team and they know that, you have to execute your pitches. If you don’t execute your pitches you’re going to pay the price and that’s what happened to us.”

The Patriots were coming of a tough loss yesterday and wanted to make sure they left it all out on the field on Saturday.

“After last night, today we were able to stay in the game,” Brigman said. “We got that inning there where we put the barrel on the ball and had a big inning and that’s exactly what we needed.”

Belen jumped out in front in the first. In what looked to be a quick inning, Christian Del Castillo bunted his way to first a few pitches before right-fielder Alex Falla launched a ball over the left field fence to put his team up 2-0.

“I was just looking for a good pitch to hit,” said Falla. “I got a fastball, middle in and I put a good swing on it.”

The Patriots answered with a run of their own in the next half inning on two straight doubles by Christian Coipel and Willy Hernandez. Two innings later the Patriots were back in the game evening it up at 2-2 on a two-out single by Ruben Someillan.

The Wolverines jumped back out in front in the home half of the forth inning on a two-run double by Marcus Diaz scoring Rafael Hernandez and Tomas Bello. The Wolverines scored twice in the seventh on doubles by del Castillo and Andrew Hernandez.