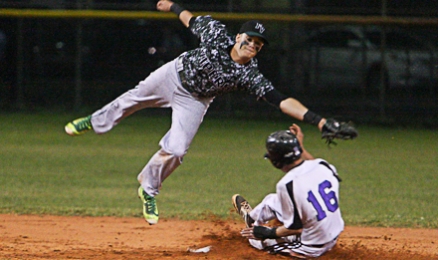 Jason Gana did everything but sell popcorn at the concession stand between innings.

Southwest Miami senior pitcher Jason Grana threw an eight-inning, complete game four-hitter, striking out 11 without issuing a walk. At the plate, he went 3-for-4, drove in a run, stole a base, and scored the winning run in the Eagles’ 3-2 victory over visiting Varela Thursday night in a 9A-15 game at Andre Dawson Field.

Grana slid under the tag on a very close play at home plate in the bottom of the eighth inning to win the game. He scored all the way from first base on a clutch one-out, hit-and-run double by sophomore Jorge Tejeda.

Grana’s outstanding performance allowed the Eagles (1-5, 1-1) to taste victory for the first time this season.

“It feels great to help my team out on both sides, on the mound as well as the plate,” said Grana, who added that his incredible energy is what he expects out of himself every game. “That’s just how I come out and play hard every day.”

He took off from first base on the first pitch to Tejeda, who went the other way, slapping a walk-off double down the right-field line.

“The umpire was calling everything outside, so I just tried to adjust and hit it that way,” Tejeda said. “Plus, it was a hit-and-run, so I had to swing anyway.”

“It’s the third game we’ve lost in the last inning with two outs,” said Varela Manager John Barbato. “We had our chances. That was tough to lose.” 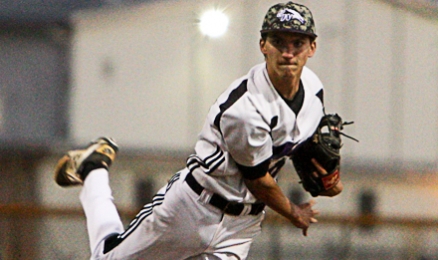 Eagles pitcher Jason Grana did it all in Thursday’s win.

On the mound, Gana yielded single runs in the second and fifth innings. He retired 18 of 20 batters otherwise, keeping the Eagles in the game and setting the stage for its dramatic finish.

“He’s been doing it for us for three years now,” said Eagles Manager Josy Torres. “He’s certainly the guy we want up there in a big situation.”

Varela tied the game at 1-1 in the second inning. Vipers senior Tony Mejias-Rivera led off with a single and scored on an error. They took a 2-1 lead in the fifth inning when Kory Hendon opened with a single, moved to second on a sacrifice bunt from Donovan Bossano, and scored on a single by Jaymark Garcia.

Southwest answered in the fifth inning, tying the game at 2-2 when Giancarlo Garces opened with a walk and later scored on back-to-back wild pitches.

The Eagles threatened to win it in the bottom of the seventh. After one out, Ryan Acosta and Albert Moralobo delivered back-to-back singles. That spelled the end of the night for Vipers starter Franco Velasquez, who pitched well enough to win by striking out 12 while walking only one in his six-and-a-third innings of work.

But Hendon came on in relief and put out the fire, retiring the next two batters to send the game into extra innings.