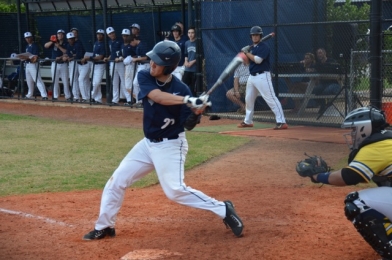 It was all offense with pitching to back it up for the Gulliver Raiders in their 13-1 victory against the Keys Gate Knights on Wednesday afternoon. Offensively, Raymond Gil and Gio Soto led the way for the Raiders, while Kevin Maura shut down the Knights on the mound.

“My mindset on the mound is to always execute and do my job,” said Maura. “Whether it’s striking kids out or forcing ground balls, I try to do whatever I need to do to help my team win.”

Maura did exactly that, allowing two hits and a run while striking out four in four full innings. The offense also got going early to put the Raiders in control right away.

“They came out ready to play,” said Raiders manager Manny Crespo. “We must have the same attitude every game in order to keep winning ball games.”

Keys Gate scored its only run in the top half of the first inning. Osmany Haya drew a walk and stole second base before their four-hole hitter, Matthew Garcia, stepped up to the plate. Garcia sat back and drove one into right center for a double, bringing Haya into score.

“I was just trying to get a pitch to hit and drive it the other way,” said Haya. “I’ve been struggling this season but I’m glad I was able to contribute today.”

The Raiders took control from there, scoring 13 runs for the day. Adrian Del Castillo, Alex Erro and Gio Soto got on base to load the bases in the bottom of the first thanks to a walk, hit by pitch and infield single. Raymond Gil then came up to the plate and drove one into left for a double, scoring both Del Castillo and Erro. Chase Sanguinetti then did his job and put one on the ground to bring in Soto for the third run of the inning.

Maura then cut the inning short, retiring three straight batters to put the bats back in his team’s hands. The Raiders responded well, putting up five runs in the bottom half of the second inning. Things got started with a double by Asa Agnoli that was followed with another walk for Del Castillo. Erro then sat back and punched one into right, driving in Agnoli. Soto then came up and delivered once again with a double to bring Del Castillo and Erro to score. 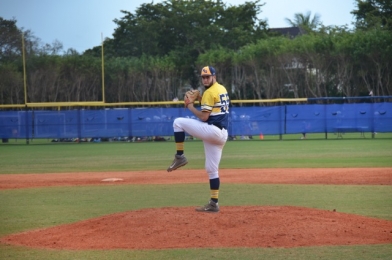 “I was just trying to put runs on the scoreboard and stay short with my swing,” said Soto. “I just wanted to drive the ball and help my team win.”

The final two runs of the inning came off of a single swing by Gil, who put it over the left field fence for a two-run home run, extending the lead to seven.

Keys Gate pitcher Jimmy Galvis was able to calm things down by retiring three straight in the bottom of the third inning, but the Raiders had another five-run inning in the fourth. Three of those runs came off the bat of Sanguinetti, who drove one down the right field line for a double to clear the bases.

Keys Gate showed some life in the fifth inning to put pressure on Gulliver. Three straight singles by Christopher Rodriguez, Brandon Espinal, and Alan Quezada loaded the bases. However, Raiders pitcher Jacob Marcos was able to get out of the jam without allowing any runs.

Keys Gate manager Rich Benavides says luck hasn’t been on his teams side this season.

“We have a lot of injuries on the team,” said Benavides. “We have to focus on getting healthy and we’ll be there at the end.”