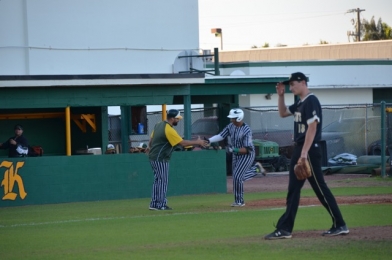 Alejandro Mosquers hit a three-run home run in the sixth to give the Cougars the lead.

Monday afternoon was a beautiful day to kick start the 2016 season. The Killian Cougars hosted the Western Wildcats in the HSBN First Pitch Frenzy in a close pitcher’s dual that was ultimately won by 6-3 the Cougars thanks to timely hitting.

To celebrate the beginning of the new season, a few Killian students welcomed all the baseball fans with the waving of the American flag during the singing of the national anthem. This set the tone for the hard fought battle between the two teams.

Both starting pitchers put on a show for the first three innings of the ball game, recording a total of 11 strikeouts. The first run of the game came in the bottom of the third inning. Things got started thanks to a base hit to right field by Killian’s Gabe Garcia and a walk to Daniel Trillo. A couple of stolen bases by the two and a wild pitch landed them both in scoring position. That was when Freddy Zamora ripped one into left field bringing both Trillo and Garcia in to score.

“I just wanted to put my team ahead so my pitcher could have more confidence throwing strikes,” said Zamora.

The Wildcats responded in the top of the fifth inning. Zachary Urso started the inning off with a base hit to right field that followed with him stealing second base. Jean Franco then did his job and moved Urso over to third base, putting him 90 feet away from home. After Michael Martinez walked, Weylin Cleri knocked one into left field driving in Urso to score while advancing Martinez to second.

”I was just trying to get the ball in play,” said Cleri. “My first few at bats I didn’t make contact so I made adjustments to make hard contact and maybe score some runs.”

Martinez then stole third base. On the very next pitch Cleri took off to second base, which prompted Martinez to safely head towards home on the throw to second, tying the game at two. 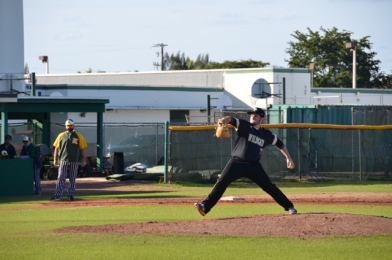 The Cougars answered with four runs in the bottom of the sixth, three runs coming off the bat of Alejandro Mosquera. Ahead in the count, Mosquera saw a pitch he could handle and hit it well over the center field fence, bringing in Chris Garcia and Alan Jiminez, who was pinch running for Eddy Arteaga.

“I was just looking for something I could hit in the gap to bring a run in,” said Mosquera. “He left it over the plate and I was able to take advantage.”

Later that inning, Frank Peña drove in Brian Ozuno, who had hit a double down the left field line.

Western manager Paul Barnes saw some positives in the 6-3 loss.

“Our defense was solid. We threw a lot of strikes on the mound which is a huge key,” Barnes said. “Our approach got better as the game went on, we just struggled early and hopefully we’ll go up from here.”

Manager Angel Herrera from Killian liked what he saw from his players, but knows that they must continue to work hard.

“I am extremely happy that we won a ball game because that is what matters at the end of the day” said Herrera. “I saw what is expected to be seen which is a lot of opportunity for growth”.

The Cougars hope to continue their winning ways as they look forward to facing Ferguson on Tuesday. The Wildcats hope to come back stronger next game as they are set to face Doral on Wednesday.