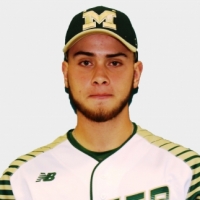 Moises Criollo’s four RBIs led the Lions to an upset of the Gladiators.

The Mater Academy Lions ripped off their fourth straight victory on Wednesday, going on the road to upset the previously undefeated Gladiators of Hialeah Gardens by a 8-3 final score.

After two scoreless innings, the Lions (4-2) found their way onto the scoreboard with three runs in the top of the third. Lewis Menendez opened the frame with a base hit and scored on a fielder’s choice by Tyler Perez. Moises Criollo then capped of the inning with a two-run single.

The Gladiators (6-1) made a game of it by posting two runs in the bottom half of the fifth. After whacking a double into the left-center gap in the third, number nine hitter Iroel Ruiz began the fifth with a single. Allan Berrios followed with a double of his own and the two were driven in by a Nathan Llanes single, narrowing Mater’s lead to 3-2.

The Lions struck back in force in the final frame. An RBI single by Brandon Dudley followed by a two-run homer by Criollo helped the Lions to score five runs in the inning, running the lead to 8-2.

Back-to-back doubles by Llanes and Mike Ramirez with one out in the bottom of the seventh tacked on a run for the Gladiators and closed out the scoring.

Joe Soto earned the victory on the bump for the Lions, striking out five through three innings of work.