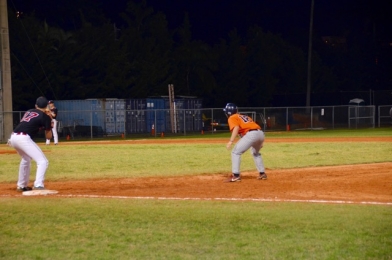 Brian Hernandez takes his lead after a base hit.

Tuesday night the Miami Beach Hi-Tides hosted the Carol City Chiefs at Flamingo Park in South Beach. The game featured plenty of runs, with the advantage going Miami Beach’s way. The HI-Tides scored 19 runs, 11 of which came in the first inning alone. The HI-Tides pitching was phenomenal while the Chiefs looked solid on the defensive side of the ball.

“It felt good to get our first win of the season,” said Miami Beach starting pitcher Alex Beer. “We started the season losing three straight, so getting this win was important to us.”

The First 11 runs came in to score in the bottom of the first inning when the HI-Tides showed their patience at the plate. The first four batters walked, and during those at bats both Eduardo Rodriguez and Manny Arias scored on passed balls. That then set up a single by Luis Vargas to load the bases one more time. The next four batters then walked again, scoring Max Pratts in that time frame. The top of the order followed, with Arias showing off his speed with an infield single to then set up a triple down the left field line by Rodriguez to score two, including Arias.

The second and third innings were also big for the HI-Tides, scoring eight more runs to tack onto things. Four of those runs came in the second inning thanks to two walks and two passed balls. The remaining four came in the third inning, due to a walk, fielders choice and finally a double ripped into left by Luis Vargas.

HI-Tides manager Juan Cordero was happy with what he saw.

“We were very disciplined at the plate today,” said Cordero. “We got up early to take the stress off of our pitchers.”

The Chiefs did their damage in the third and fourth inning, scoring four runs between the two frames. Three runs came in the third, when Jeremiah Blake scored James Vance on a sacrifice fly. The next two runs of the inning scored when Brian Perez drove one into center, scoring James Falmer and Angel Suero. The next inning, the Chiefs scored one run when Vance brought in Ayeobele Randolph, after a leadoff triple by Randolph in the left field gap.

Chief’s manager Randy Rodriguez believes he knows what it is that his team must do for them to have a chance.

“We need to throw strikes,” said Rodriguez. “We have a game tomorrow and Thursday, and in order to have a chance, our pitching staff needs to give our defense a chance to make plays.”

The HI-Tides hope to get closer to .500 as they are set to face the Miami Central Rockets on Wednesday. The Chiefs are still looking for their first win of the season as they square off against the Mourning Senior Sharks next.