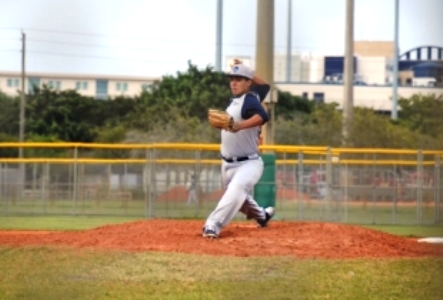 The Miami Brito Panthers hosted the young I-Mater Knights on a chilly Tuesday afternoon. Before the first pitch was even thrown, these two teams looked focused on the task at hand; to win the ball game. Both teams looked very clean in their pre-game activities, trying to send a signal to the other side.

The end result reflected that same grit, as the Panthers held on for a 3-2 decision.

“It was an honor to start the first game of the season against the defending 2A state champions,” said Knights starting pitcher Darwin Rojas. “At the beginning there was a lot of jitters, but as the game progressed, we started to settle in and just play the game.”

Things quickly got underway in the top of the first inning when the Knights scored two runs to start the game. It all started with Joseph Vence and his great at bat. He fouled off a couple of pitches before finally drawing a walk. Michael Bell connected for an infield single, showing off his speed down the first base line. Darwin Rojas then followed through, moving Vence over to third.

On the very next pitch, Bell took off to second, and Vence was able to score due to a throwing error which also allowed Bell to advance to third. Sabus Arauz, looking for a pitch he could handle, put the bat on the ball and was able to score Bell on a sacrifice fly to give the Knights the early two-run lead.

Miami Brito responded right back, scoring a run in the bottom half of the first. Leadoff batter Alex Nino got the inning started with an infield hit and was able to advance to second due to a throwing error. Nino was then able to get to third on a wild pitch and score on the very next pitc,h thanks to a passed ball. 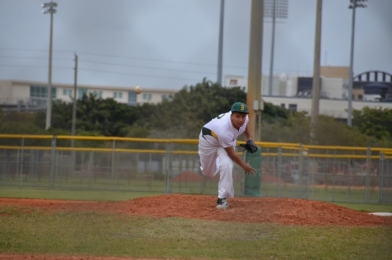 Things were quiet offensively for the next two innings thanks to great pitching from both teams. The Panthers struck again in the bottom half of the fourth that began with a moonshot to deep center field for a standing triple from junior Onelio Perdomo. Cristian Alvarez was then hit by a pitch, which brought up pinch-hitter Ariel Tejera to respond in the clutch. He delivered, hitting the ball well to the left-center gap, driving in both Perdomo and Alvarez to put the Panthers up by one.

“I had a man in scoring position so I just had to drive the ball hard somewhere and try to bring some runs in,” said Tejera.

The rest of the game was controlled by pitching, with neither team allowing another run. JC Valdez, the starting pitcher for the Panthers was satisfied with his performance, but knows that he must always work to get better.

“I was excited for today’s start,” said Valdez. “I have to work a little more on my command so I could limit the walks and have a successful year.”

Knights manager Jorge Mico seemed optimistic and was not dwelling on this loss too much.

“I saw a lot of heart and character from my players today,” Mico said. “We were one run away from beating the state champions. I am very proud of my boys and the job they did today.”

Panthers assistant coach David Fanshawe was happy to win their first game of the season. But he knows that his team must continue to work to achieve the same accomplishment they achieved last year, the state championship.

“I did not like how we looked today,” said Fanshawe. “We looked a little flat today. We stole one today with timely hitting but we must work on having more enthusiasm throughout the whole game.”

The Knights hope to capture their first win when they face off against Miami Springs on Wednesday. The Panthers are looking forward to stay perfect as they are set to meet up with the Miami Christian Victors on Friday.