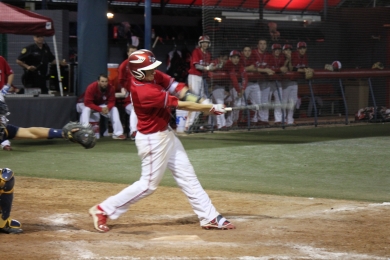 In the first HSBN Game of the Week of the season in Miami-Dade, the Miami Country Day Spartans earned their first win of the season with a 6-5 decision over the visiting Palmer Trinity Falcons.

“It feels great to be a part of the Game of the Week,” said Spartans manager Paul Barrios. “But what was really good for us was the first win of the year. We have a really young squad. If you looked in there we had a lot of guys in crutches and walking around. When Sale got thrown on the play at home, the guy that went in for him was the last player we had. A win like this is good for them; they’ve been working really hard.”

The Spartans (1-2) came into the game looking to right their ship after dropping their first two games of the season. With a young nucleus of players with no seniors, the Spartans had to do that against a Falcons team with a core of seniors.

The Falcons (1-1) were looking to apply pressure right out of the gate on the legs of senior shortstop Jarrett Pico. After a walk, Pico stole second, went to third on a passed ball and scored the first run after Blake Miller started a rundown while trying to steal second base.

The Spartans responded in the bottom half of the first in a big way, tagging the Falcons with five runs in the first inning, highlighted by Kian Andersen’s RBI double down the third base line that scored Jordan Sale from second base. Andersen went to the plate with his plan knowing the pitcher would throw an off-speed pitch outside, but then the pitcher made a mistake.

“He threw me something inside and I just reacted and pulled it,” said Andersen.

From then on it was all Falcons. They chipped away at the lead in the following innings showing the fight of a team with experience.

“I was proud of them but I expect that out of them,” said Falcons manager Donnie Harvey. “We have some experienced players and they know they can come from behind. It’s not a team that’s going to panic.”

Pico once again started things off for the Falcons with a double to left-center field. Miller batted him in on a ground ball, and Coleson Hebble scored on a sac-fly by Justin Kross, putting the Falcons down by only two runs. Hebble and Miller were back in the action during the fifth inning leading off with back-to-back doubles cutting the Spartan lead to one run. 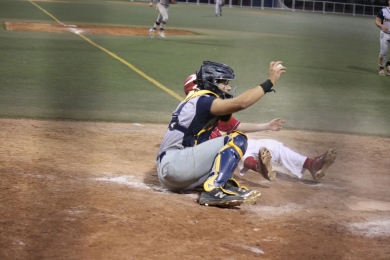 Zack Peckins on a play at the plate.

The Spartans tried getting back on their feet during the bottom of the fifth but the Falcons defense kept the game a one-run affair throwing out a runner at the plate to end the inning. In the top half of the sixth, the Falcons tied the game on a sac-fly by Hebbel scoring Alan McCauley, but couldn’t capitalize on the next opportunity leaving the bases loaded.

The Spartans were able to brush off giving up their lead and quickly salvaged the game in the top of the seventh inning on an RBI double by catcher Griffin Sennett scoring Jesse Grosman.

The Falcons efforts didn’t go unnoticed. They never felt the game was out of their reach and battled back throughout the game, managing to tie the game after falling 5-1 early in the game. Harvey knows his team was capable of pulling off the comeback but acknowledges some of the sloppy play at the beginning put them in a tough position.

“We had some opportunities,” said Harvey. “We had the bases juiced with the number two, three, four hitters coming up in the sixth inning and couldn’t get much out of it. We threw the ball around too much in the first inning but we fought back, I was proud of them for that, but you know at the end of the day we came up short.”

The bottom of the seventh was all Connor Goodman, as he finished the game off without any threats to his team’s slim lead.

“I mean I know I can get the job done for my team,” said Goodman. “I’ve done it before and I’m going to keep doing it. I just feel confident in myself. I’ve been playing this sport for 10 years and the confidence just builds up.”

The Falcons will look to avenge this lost in their next game against the Spartans. Meanwhile the Spartans look to build on this win when they face the Archbishop Curley Knights before meeting the Falcons once again on the 18th.