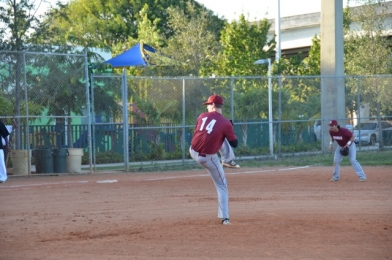 Dylan Carter got the win for the Hawks, allowing two runs in four innings.

It was a 6A-16 showdown on Monday afternoon when the Norland Vikings hosted the Miami Springs Golden Hawks at Scott Park. It was a nail biter, with both teams hanging on until the final out. The Vikings took command early, but the Hawks prevailed with a 9-3 victory in their district opener.

After dropping the first two games of the season, Miami Springs has now won three in a row. The win gives the Hawks good momentum with district leader Goleman up next on Wednesday.

“We kept fighting, which is something I liked a lot,” said Hawks manager Julio Mendoza. “Norland is known for being very scrappy, so to beat a team like that you need to have the will to win, and we had that today.”

Norland took command early, scoring two runs in the first two innings. The first run came in when Brandon Carter drove in Khalil Harris on a sacrifice fly. Harris had gotten on base earlier that inning with a base hit to left field. The second run was scored in the bottom of the second due to heads up baseball by Dimitri Duverger. It was a first-and-third situation, with William Alvarez on first. Alvarez stole second and Duverger was able to take home on the catcher’s throw to the bag.

The game was then controlled mainly by Hawks pitcher Dylan Carter. Carter went four innings and kept things in check to pave the way to the win.

“Norland stayed in the ball game every inning,” Carter said. “My team needed me to step up so I’m glad I was able to contribute and I’m glad we stuck together.”

The Hawks showed their patience at the plate in the top of the third inning. It began with three straight walks, that led to only two being on base thanks to a pickoff play. Next up, Orlando Borroto, punched one up the middle to load the bases once more. Two hit by pitches and one walk later scored the first three runs for the Hawks. The next run came in in part by a gutsy call by the Miami Springs coaching staff. They set up a triple steal, sending Javier Cruz to safely steal home. Two batters later, Yadel Abreu reached on an infield single scoring Steven Torres and Andre Ramirez, on a throwing error.

Norland responded with a run of their own in the bottom half of the inning, when Brandon Carter scored Collado, who had started the inning off with a double. 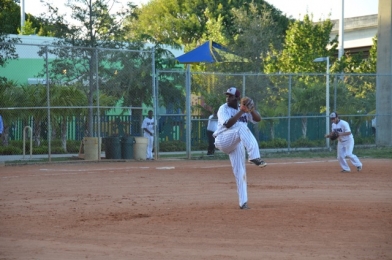 Miami Springs stayed hot, scoring a total of three runs between the following two innings. One run in the fourth came in to score when Borroto drove one into right field for an RBI double, bringing in Dylan Carter. The two runs in the fifth were scored off the bats of Dylan Carter and Thomas Diaz.

Norland (1-3, 1-2) was not going out without a fight. The Vikings scored three runs in the fifth to cut the deficit down to three, the runs scored thanks to RBI hits by Max Gordon and Mehkai West. The Hawks pitching, however, was able to slow the Vikings down before they could do any more damage.

Vikings manager Andre Payne saw some positives in the loss.

“We showed spirit at the end which I liked a lot,” said Payne. “We started off slow, so we need to work on that so we do not fall into a hole.”

The Vikings hope to turn things around against Miami Jackson on Wednesday.