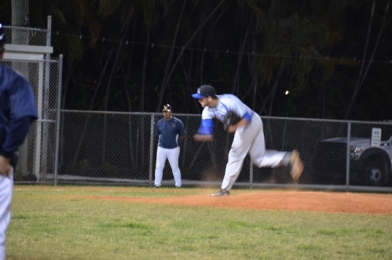 Fernandez only allowed one run and struck seven out in six innings.

The South Dade Buccaneers had a big night of offense on Thursday evening at Flamingo Park where they faced the Miami Senior Stingarees. The Buccanneers had nine hits as a team and earned a convincing 8-1 victory.

The Bucs (4-0) took control in the top of the fourth inning. Alek Manoah began things with a base hit to right field that then followed two straight bunts for hits by Richie Sobalvarro and Joel Rivero. Later that inning, Jason Rivero ripped one into left, scoring Manoah and Sobalvarro.

“We made some mental mistakes tonight but we did swing the bat well,” said Buccaneers manager Fred Burnside. “Miami High could swing the bat, but we played solid defense, which helped our pitcher.”

The Stingarees started off hot on both sides of the ball. They retired the first six batters they faced while scoring a run in the bottom of the first inning. Christian Torres led off with a double and was able to advance to third on a balk by the pitcher. He then went in to score when Oney Pino drove one into left field for an RBI single.

“I was trying to jump on the first fastball I saw,” said Pino. “He looked like he was throwing a lot of strikes so I was just trying to do my job.”

The Buccaneers tied the ball game up in the top of the third inning. Jason Rivero was able to get on third due to fielding errors by the Stingarees. Two batters later, Danny Vaughan punched one into right to bring in Rivero for their first run of the game.

The next four innings were controlled by Buccaneers pitcher, Giovanni Fernandez. Fernandez threw six strong innings, allowing one run and striking out seven. 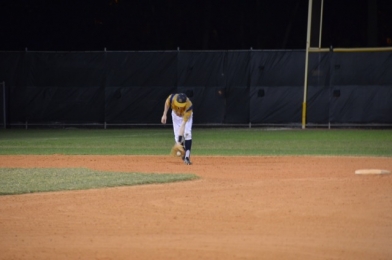 Gustavo Miranda makes a play at shortstop to record an out.

“I was just trying to throw a lot of strikes,” said Fernandez. “I mixed up my pitches and it turned out to be a good day.”

South Dade hit their way to victory for the remainder of the game.

The top of the fifth was the biggest inning for the Buccaneers, scoring four runs. Gabriel Cruz started the inning with a double off the center field fence. The Stingarees then walked Manoah intentionally which brought up Sobalvarro. He did his job, driving one into right center field, scoring both Manoah and Cruz.

The other two runs came off the bat of Nico Gonzalez, who drove in Sobalvarro on a sac fly and off the bat of Jason Rivero, scoring Joel Rivero who had hit a double to get on base. South Dade scored their final run of the game in the top of the sixth when Cruz lined out to left to score Willy Escala, who had reached base on an error.

Stingarees manager Frank Suarez sees a lot of room for growth in his team.

“There are a lot of things that we can improve in,” Said Suarez. “We swung the bats pretty well, but we must execute with men on base.”