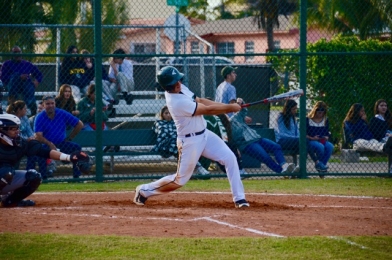 The St. Brendan Sabres picked up their second win of the season on Thursday, beating the Sagemont Lions by a score of 6-3. It was an intense game throughout, with both teams hanging in there trying to keep it close.

The bottom of the fifth and sixth innings were big for the Sabres, as they scored five runs between the two frames. The fifth got started with Torrente reaching on an infield error that then set up the sacrifice bunt that was laid down by Lopez. Abraham Sequera then did his job and moved Torrente over to third on a groundout to the right side. That then led to Nick Bermudez, who finished with two hits on the day, hitting a double down the left field line to score Torrente and give the Sabres the lead.

“I was just trying to land one in for a hit to score the run,” said Bermudez. “But I saw a good pitch that I could drive and just hacked away.”

Later that inning, Ryan Hernandez hit one into center field for an RBI single, driving in Bermudez.

The Sagemont Lions came out of the gates hot, with starting pitcher Albert Hernandez striking out the side in the bottom of the first inning. Their first run came in the top of the second, when Sammy Infante drove one into left field, scoring Angelo Pagliuca, who had started the inning by punching one into right field for a base hit.

“I was expecting a fastball because that was the first pitch he threw my first at bat,” said Infante. “He threw me another first-pitch fastball so I sat back and ripped it the other way.”

Things got interesting in the bottom of the third, with the Sabres up to bat. Brandon Denis began things by drawing a walk to then set up a base hit by Michael Torrente that allowed Denis to advance to second. Jordan Lopez came up in the clutch and was able to land one into right field, scoring Denis on an RBI single. 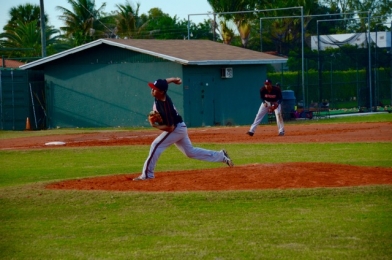 Albert Hernandez struck out seven in his outing.

The Lions then showed their patience at the plate, walking Pedro Martinez, Alexis Castillo, and Alejandro Martin to load the bases in the top half of the sixth. Sabres pitcher Andres Gonzalez, however, was able to force a ground ball to end the inning.

The bottom of the sixth began with a walk after a great at bat by Brian Castillo, who was then able to advance to second on a throwing error. Later that inning Sequera was able to score Castillo and Lopez, who had reached base on balls, with a double. Sequera then showed off his speed by stealing third base before Bermudez drove him in for the third run of the inning.

Sagemont was not going to go out without putting up a fight, which is exactly what they did in the seventh inning. Things got started when Michael Sagaro hustled down the line for an infield single and then Hernandez singled to left. Two batters later, Martinez moved both Sagaro and Hernandez into scoring position. Stefan Revelo was then able to rip one into left field for a double that scored both runners. The Sabres were then able to end the inning before any more damage was done.

“It was a very competitive game,” said Lions manager Ricky Gutierrez. “This is a very young team, so to battle like we did against a good team is a great learning experience.”

Sabres manager Tito Rodriguez reminded his team that they must keep playing until the game finishes.

“We have to play all 21 outs,” said Rodriguez. “If we play every inning with the same level of intensity, we will be in good shape.”

The lions hope to turn things around on Tuesday when they travel to St. Andrew’s while the Sabres hope to stay perfect against Gulliver next Wednesday.