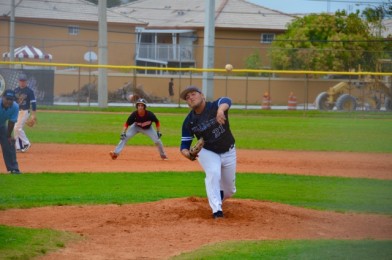 Alejandro Castro struck out three and allowed just two runs in his outing.

The Hialeah Educational Academy Bulldogs hosted the Dade Christian Crusaders on Thursday at Slade Park. The game was a close one, until the Bulldogs erupted in the bottom half of the fourth, scoring nine.

“We started off slow in the beginning,” said Bulldogs manager Reggie Rodriguez. “We did not give up, though. We fought through and stuck together.”

The first run of the game came in the top of the first when Paul McIntosh of the Crusaders put the ball on the ground to bring in Garrett Shefield, who had gotten on base thanks to an infield error.

Sheffield came out strong again in the third, starting the inning off with a triple to deep right-center field. Later that inning, Andy Gonzalez drove a hit to left field which brought in Sheffield to score.

“Coach told me to look middle away,” said Sheffield. “I was trying to be aggressive at the plate and hit the ball hard somewhere.”

The Bulldogs came out of the gates hot in the bottom half of the fourth where they put up nine runs.The Bulldogs scored in the fourth on an RBI single by Anthony Navarro, a two-run double by Rene Jimenez, a walk by Ricky Jimenez, and a grand slam by Marcial Hernandez. 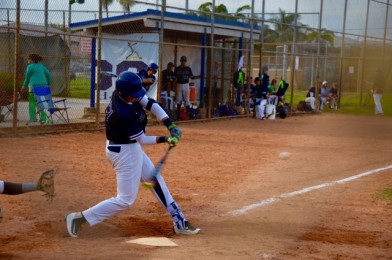 Marcial Hernandez hit a grand slam in the fourth as part of his three hit day.

“I just wanted to do my job and put the ball in play,” said Hernandez. “I saw a good pitch and put a good swing on it.”

The Bulldogs final run of the game came off the bat of Anthony Navarro, driving in Hernandez who had reached base with an infield single.

Crusaders manager Rich Cook liked the way his team fought in the beginning of the game, but wished for a different outcome.

“We competed really well through the first three innings,” said Cook. “Once we learn how to stay competitive throughout all seven innings, we’ll prove to be a really good team.”