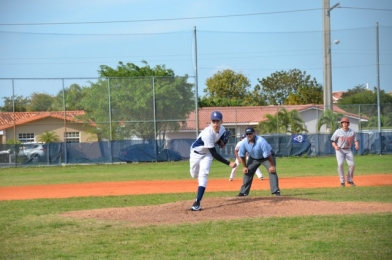 Edislandy Agusti pitched a complete game, striking out 6 to get the win.

The Coral Park Rams hosted district rival South Miami on Tuesday afternoon in a 9A-14 showdown. The game was won by the Rams thanks to an outstanding outing by pitcher Edislandy Agusti. He pitched a complete game, allowing no runs and striking out six.

“I just did everything I could to help my team,” said Agusti. “I played all out and left everything out on the field.”

The Rams showed their strength on defense in the top of the second inning. The inning got started when the Cobras’ Deivis Jacomino drove one into left-center for a double. Kevin Capote then came up to the plate and attempted to move him over with a bunt. But Agusti turned a great bunt into an out at third when he threw the runner out trying to advance. The inning ended with a great catch by the left fielder, Jose Rollins, stealing a possible double down the left field line.

The Rams showed some hope in the bottom of the fourth, but the Cobras kept their composure and were able to escape the inning. Axel Gomez began the inning with a base hit into center field that led to Brandon Gomis sacrificing himself and bunting Gomez over to second. Erik Estevez then punched one into the hole for a double, moving Gomez to third. Estevez finished the day with two hits.

“I was looking for a fastball away and going opposite field,” said Estevez. “It was a friendly matchup because I’m friends with the opposing pitcher, so it was fun to face him.” 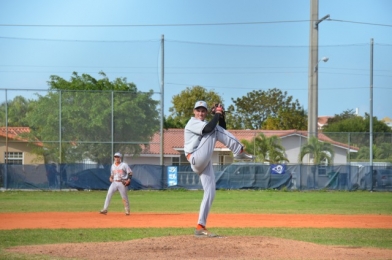 Deivis Jacomino fought hard in his outing, only allowing one run

Rey Perez was then hit by a pitch to load the bases with only one out. Deivis jacomino did not panic though, and was able to strike out the next batter and then force an infield fly for the final out of the inning.

“Every day we work hard in practice to succeed,” said Jacomino. “Today I just tried to hit my spots and allow my defense to make plays.”

The only run of the game came in the bottom of the sixth inning. Gomez drove one back up the middle for a base hit and was then able to steal second, putting himself in scoring position. Alex Gato then put the ball in play, reaching on an infield throwing error that allowed Gomez to score.

“Our pitcher that pitched today did a great job and he’s been doing a great job,” said Cobras manager Howard Cuervos. “It was a great game. My players fought hard but a couple of mistakes cost us the game.”

Coral Park’s manager Juan Carnicero was happy with the win, and hopes to continue this type of play.

“We battled all day,” said Carnicero. “We aren’t going to blow everyone away, so its good that we were able to keep our composure and bring in that run at the end.”