Hialeah Gardens Stays Perfect In District With Win Over American 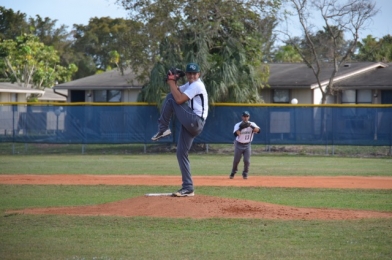 Marco Ruiz came out strong, earning the win for the Gladiators.

The Hialeah Gardens Gladiators traveled to American High on Wednesday afternoon to face off against the Patriots. For the second time this season, the Gladiators came out on top, 5-2.

The game was quiet offensively, thanks to great pitching and defense from both sides, until the top of the fifth inning when Hialeah Gardens scored four runs. The inning got started when Nathan Llanes and Allan Berrios drew walks that were followed by a hit by pitch to Mike Ramirez. Lazaro Morales then came up to the plate and delivered a big RBI single to drive in the first run of the game.

“We are bonding real good,” said Senior Lazaro Morales. “We just have to keep going and continue playing like we have been all season.”

Later that inning, Berrios scored on a passed ball that then led to by Jason Aguilar to score Ramirez. Marco Ruiz then drove one deep for a triple to score Aguilar to give the Gladiators a four run lead. Hialeah Gardens then scored their final run of the game in the top of the sixth when a single off the bat of Berrios scored Llanes.

The Patriots narrowed the deficit in the bottom of the sixth when they scored two. A bases-loaded a walk to Sean Dieppa plated one of the runs. Earlier in the inning a pair of singles by Jose Chavez and Darian Oliva started the rally. 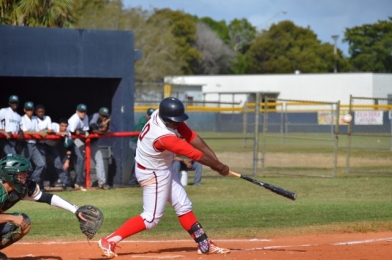 Chavez had a big day at the plate with two base hits.

“I didn’t see many fastballs so I was sitting on curveballs,” said Chavez. “I just sat back and drove it where the pitch was thrown.”

Derek Ordaz then showed his patience at the plate and drew a walk to bring in Chavez. Sanders Napoles then did his job and put the ball in play, driving in Oliva for the second run of the inning.

Down by three in the last inning, the Patriots showed some life. Steven Martinez drew a walk and Mike Montes hit one deep for a double that moves Martinez to third. The Gladiators pitcher and defense did not panic, though, as they were able to escape the inning with no damage being done.

“Pitching and defense has been our ingredients all year,” said Gladiators manager Tino Burgos. “We backed up our pitcher today and had timely hitting.”

“I didnt see much that I liked today,” said Sosa. “We showed some fight towards the end of the game, but we need to start the game stronger.”