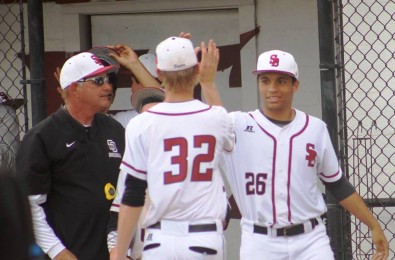 In all but two cases, the top seeds prevailed Saturday in the Gold Bracket on the opening day of the HSBN March Madness Shootout. #13 Chaminade-Madonna beat #4 Boca Raton 7-5, and #10 LaSalle topped #7 Goleman 10-5. Archbishop McCarthy, Douglas and SLAM all won to keep the top three seeds alive, while #5 St. Thomas Aquinas, #6 Monsignor Pace and #8 Killian also won.

Chaminade (9-5) built a 7-0 lead on the strength of a six-run fourth inning and held on to top Boca Raton (10-4). With the bases loaded in the top of the fourth, Chris Vickers walked to score Mike Drag. Chris Schoeller’s double scored Roberto Petit, Dylan Arnett and Vickers. Schoeller scored on Matt Johnson’s fly ball. Eric Bonkowski singled to bring home Kevin Rodriguez to cap the scoring in that inning. Zach Zientarski went 3-for-3 and Anthony Acino went 2-for-5 with a run and RBI for Boca Raton, which rallied for five runs late in the game. The Lions move on to play St. Thomas.

Top-seeded Archbishop McCarthy defeated #16 Mater Academy 11-1 to advance to play Killian, which edged #9 Mater Lakes Academy 2-1 in eight innings. Alejandro Mosquera homered to give the Cougars (10-3-1) an early lead, before the Bears evened things up when Jose Rojas doubled and came around and in on a pair of passed balls. Danny Trillo led off the bottom of the eighth by lining a shot deep to left field for a triple and later came in on a passed ball to walk-off to victory.

“I felt very good because of the hit, but more so because I put my team in a very good position to win,” Trillo said. “We welcome playing tough teams like this because it is the best possible way to prepare ourselves for the end in the playoffs, so we can accomplish our greater goal.”

LaSalle scored five runs early and then fought off a tenacious Goleman team to win. Carlos Quintana and Santos Grande scored on an error and Jesus Villacis scored Danny Rodriguez for a three-run third inning that pushed the Royal Lions (10-5) to 5-0. Goleman came back in the bottom of the inning with three runs. German Villar came home on Thomas Hernandez’s single, and Brandon Paez’s single scored Jeremie Garcia and Hernandez. The teams traded runs in the fourth and fifth innings before LaSalle put up three runs in the sixth and another in the seventh.

#2 Douglas came back from an early 1-0 deficit to defeat #8 Port St. Lucie 3-1. Chad McDaniel went 2-for-3 with an RBI for the Eagles (13-1). He singled to score Brady Norris to tie it at 1 before Josh Miaskowski’s base hit brought in Jonathan Pino. Jordan Hill’s sacrifice fly brought in Luis Acavedo for another run for the Eagles in the third. Zach Taglieri scored Robert Ocasio as the Jaguars (8-5) took a 1-0 lead in the top of the first. Douglas moves on to play LaSalle. 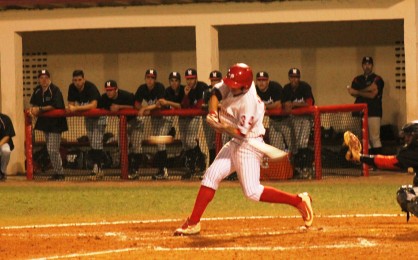 Bryan Diaz had an RBI single for the Spartans.

#3 SLAM shut out #14 Belen Jesuit 10-0. Jeter Downs went 2-for-4 with two RBIs and two runs, and Brian Frias went 2-for-4 with two runs for the Titans (12-3), who scored four in the second and three in the fifth en route to the win. Jose Garcia added two hits, including a double, and drove in four runs, and Cristobal Arenas pitched five innings, allowing one while walking four and striking out four to earn the victory. SLAM advances to play Monsignor Pace.

#5 St. Thomas extended its winning streak to eight games as it beat #12 TERRA 7-2. St. Thomas built a 3-0 lead by third inning and held on to top the Wolves (7-8). Cameron Krzeminski went 3-for-3 with three runs and two RBIs, and Earl Semper and Anthony Mulrine drove in two runs each for the Raiders.

In perhaps the most exciting contest of the day, #6 Monsignor Pace battled back from a two-run deficit to overcome #11 Westland Hialeah for a 6-2 comeback victory. Jonathan Reyes-Diaz doubled and scored on an RBI single from Brandon Cruz for the deciding run in the bottom of the fifth. Bryan Diaz drove in Anthony Sanabria to spark a three-run sixth that helped seal the win, and Sanabria went 2-for-2 with an RBI and two runs.

The Wildcats proved a tough and challenging foe. Starter Giovanni Arriera delivered a quality start and the defense backed him with several diving plays and a fearless approach. Left fielder Michael Uz delivered the play of the day when he robbed a home run with an amazing leaping catch at the fence in the bottom of the second.

Westland Hialeah jumped to an early lead with two runs right out of the gate. Bryan Lavistida lined a single to center, then timed himself perfectly to steal both second and third. David Vazquez then drove him home with an RBI single, before Evander Hernandez collected the first of his two hits on an RBI single.