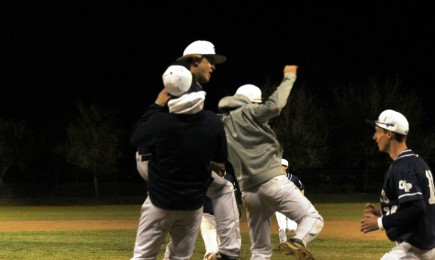 Georgetown Prep shook up the bracket with a big day that resulted in two upset victories on Monday, in the second day of action in the HSBN March Madness Shootout.

The Hoyas started by downing Charlotte Christian 8-3 in their opening game, and came back later in the night to edge #1 seed Cypress Bay 6-5 in the final game of the day at Pompano Four Fields in Pompano Beach.

#15 Miami Brito also continued it’s Cinderella run by knocking off #10 Pompano Beach 5-0. The Panthers (9-4) will now face #3 Palm Beach Central, after the Broncos also won two games on Monday to survive and advance. The Broncos (9-6-1) beat #14 Hialeah 9-0 in an opener that was rained out on Saturday, then turned around and beat #5 Westminster Academy 9-3 in the quarterfinals.

The Hoyas traveled down from Maryland over the weekend but showed no signs of jet leg. They exploded for a lead they didn’t surrender with five runs in the top of the second, and starter Seamus Keenan tossed six shutout innings to keep Charlotte Christian (6-6) at bay. After making a recent adjustment from pitching in the stretch, Keenan was in control as he struck out two while allowing two hits and four walks.

“This is definitely going to set us off for a good week,” Seamus Keenan said following his victory. “Our Florida trips are sometimes up-and-down, but I think we have good camaraderie on this team and we have a bunch of sophomores that are stepping up this year. It was just a good day.”

Brooks Bengtson reached on error to start the second, becoming the first to score as the Hoyas batted around the order. Ben Sedgwick and Zach Seal had RBI singles and Jordan Myers and Zach Davis also scored.

That energy carried over into the late meeting with the top-seeded Lightning. Tied heading into the top of the seventh, Georgetown Prep scored three runs and then just held off a final rally bid from Cypress Bay to claim the narrow victory. Matt Mervis had a sac-fly RBI to bring in John Dempsey, and Harry Flannery followed with a two-RBI double.

The Lightning (9-8) nearly tied it back up. Raul Quintero walked, Anthony Figueroa was hit by a pitch and Jose Natera singled to load the bases. Michael Moreno delivered a sac-fly RBI to plate Quintero and Devin Ramirez singled to right field to pull Cypress Bay within one run. The Hoyas went to reliever Joe Jakobowksi, who quickly got the final end to end it.

Anthony Maldonado had a strong start for Palm Beach Central.

Anthony Maldonado set the tone for Palm Beach Central with a strong start against the Thoroughbreds. While the senior right-hander was keeping the Hialeah bats quiet, it only took a few frames before the Broncos got things going. The club went on to score 17 runs over the two games.

Brendan Power and Austin Burke combined to do the most damage in the quarterfinal. Power was 2-for-3 with a double and three runs, and Burke went 2-for-3 with a triple, three RBIs and a run. Hunter Gunn also had a triple and Piersen Reynolds had two RBIs.

Zach Goberville was 2-for-2, Felix Torres had a double and scored and Christian Sosa had a two-RBI single for the Lions (9-7). Westminster managed six hits but struggled to put together any big innings.

Charlotte Christian also struggled to capitalize on base runners, stranding six guys over the first six innings. Down to their final outs the Knights finally got going to avoid the shutout. Nick Suarez walked and scored on a scorcher deep to left that went for an RBI triple for Reid Mayers. Jonah Beamon was hit by a pitch and then both runners scored thanks to a two-RBI double from Drew Donathan.