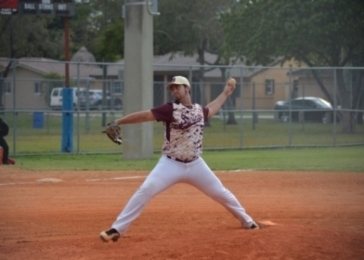 Bryan Garcia was strong in his outing.

It was a great day for the Miami Jackson Generals. They scored 14 total runs, while holding the Miami Springs Hawks to just four runs in the district matchup. Generals manager Rafael Jiron loved the enthusiasm and desire to win from his players.

“We believed in each other and never gave up,” said Jiron. “We came out with a lot of energy. We had life today and the sky is the limit for us.”

Michael Amat and Tommy Diaz both had singles in the first to start the game off for the hawks. Dylan Carter then came up to bat and put the ball in play, getting able to get on base due to a fielders choice. Amat and Carter later cam in to score, putting the second run on the scoreboard after a pickoff play in between first and second base.

The Generals responded quickly, putting six runs on the board in the top half of the second. Giovanny Ocampo began the inning by drawing a walk that set up a single by Ricky Guerrero. Yoan Rosales then came up to the plate and punched one into the outfield for a single of his own to load the bases. Thats when first batter Joel Rivera came up big with a triple over the center fielder to drive in three runs and clear the bases. He finished the day going 3 for 5 with two triples and a home run.

“I was just trying to get my team pumped up,” said Rivera. “I tried to take the ball the other way. We got the W and thats all that matters.”

Hector Rodriguez came up to bat and drove Rivera in for an RBI single. Kerlin Mateo and Armando Prieto also had a pair of hits that inning and came in to score.

“The key to our success this year has been energy,” said Prieto. “When we come out here and have the energy we had today, no one can stop us.” 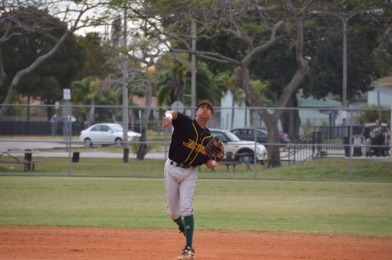 Edgar Cruz makes a play at shortstop to record an out.

Guerrero started the third inning with a double and then went on to score off the bat of Julio Santana. the Hawks defense, however, was able to hold them before any more damage could be done.

The Jackson Generals were not done offensively. They had another huge inning in the top of the fifth where they scored another six runs. The first two runs of the inning came off the bat of Rivera when he drove one over the left field fence for a two run home run. The final four runs were all scored by Rodriguez, Mateo, Edgar Cruz, and Ocampo thanks to a couple hits and a pair of walks.

Miami Springs showed some life in the bottom of the fifth, when Edrik Gonzalez and Amat were able to score thanks to a walk and a pair of hits.

“With a man in scoring position I was just looking for a pitch to drive,” said Amat. “I worked the count and saw a pitch I could handle and drove it for an RBI single.”

Hawks manager Julio Mendoza did not like how his team looked today.

“We are a hard working team but we came out flat today,” said Mendoza. “Jackson had a great game today, but we look forward to facing them again when the season is on the line.”