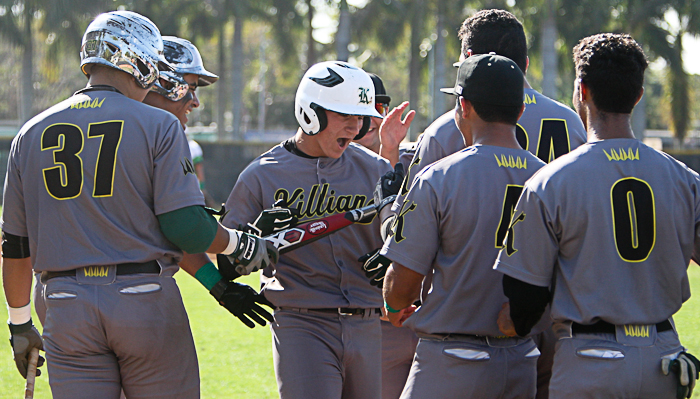 The Cougars and Warriors played to a 7-7 draw Wednesday night as darkness brought a halt to the Top-10, non-district encounter.

“In the name of preparing ourselves, I can’t think of a better opponent to do that than a tremendous Westminster Christian ballclub,” Herrera said. “They’re a great team. They’re tremendously coached. And to come in here, give our best effort, battle the way we did for eight innings, I’m proud of my guys.”

Still, a tie is not what Cougars second baseman Chris Garcia was satisfied with.

“No, no, I was hoping for a win,” said Garcia, who belted a two-run home run in the second inning, one of his three hits for the game. “But they’re a good team, they came back.”

“I was just sitting on fastball, got it and squared up,” said Garcia, who hits in the No. 2 hole for the Cougars and isn’t counted on for power hitting. In fact, he bunted over Zamora in his first at-bat during the Cougars’ three-run first inning. “No, just to hit the ball hard, something up the middle; I got it,” he said.

He wasn’t aware of his accomplishment but rounding first base Garcia quickly learned of his roundtripper. “When I heard (my teammates) screaming,” Garcia said of the moment he knew.

Hitting at the top of the Cougars’ lineup, Garcia and Zamora combined to go 6-for-9 and accounted for four runs. Garcia followed his home run with a single and scored a run in the sixth inning, then doubled in the eighth inning and got as far as third base before being stranded there. 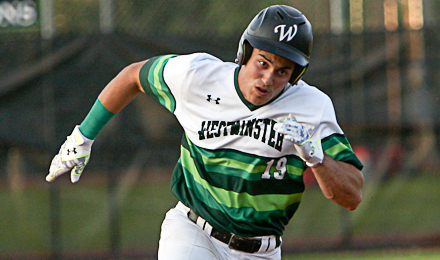 Westminster Manager Emil Castellanos said he felt the Warriors were too gracious to their visitors.

“Against a good program like Killian you can’t make that many mental mistakes and physical mistakes and expect to win,” Castellanos said. “We pulled off a tie but gave too many opportunities to a good team.”

Clinton Gulley led the Warriors’ 11-hit attack with a 3-for-4 night that included a double, a run scored, and two RBIs.

“I was seeing the ball well,” Gulley said. “I felt comfortable at the plate.”

Four Killian standouts delivered two hits or more to lead the Cougars, who piled up 12 hits. Gabriel Garcia went 2-for-4 with a double, RBI, and two runs scored. Kyle Krtausch also contributed with a 2-for-3 night and two RBIs. Brian Ozuna drove in two runs and Alejandro Mosquera scored another.

Westminster Christian’s Nick Auerbacher came out of the Warriors’ bullpen to work the final four innings, striking out three.