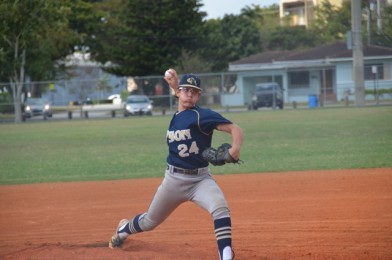 Robert Peña was in control during his outing.

It was a hard-fought battle at Stafford Park on Friday afternoon where the Miami Springs Hawks hosted the Reagan Bison for HSBN’s Miami-Dade Game of the Week. The Bison snapped a three-game losing streak while putting an end to the Hawks three-game winning streak with a 5-3 victory.

“We hustled a lot in today’s effort,” said Bison manager Rafael Mesa. “We had a tough three-game losing streak, but I keep telling my boys that we must continue to work hard and the hard work will eventually show.”

The first run of the game came in the top of the first inning. Jorge Nava started the inning with a double that then led to Christian Delos Santos switching places with him with his own double, driving in Nava.

The Hawks responded quickly, scoring two in the bottom of the first. Thomas Diaz began things with a hit by pitch and later advanced to second on a bad pickoff throw. He then showed his speed and stole third base putting him 90 feet away from scoring. Dylan Carter then came up big with a double that scored Diaz. Later that inning, Carter was able to reach home safely on an infield error.

Reagan did not let the deficit get to them. They came out strong again in the top half of the second. Robert Peña drove one deep to start the inning off with a triple. Rodrigo Gotera then came up to the plate and punched a single into left to drive Peña in to score. Delos Santos came up clutch once again and hit another double to move Gotera to third.

“I was just trying to hit the ball hard,” said Delos Santos. “I was just looking to drive the ball and do good things for my team.”

Benjamin Meza then hit one back up the middle to score both Delos Santos and Gotera for the final runs of the inning. The Bison scored their final run of the game in the top of the fourth off the bat of Delos Santos to score Gotera, who had gotten on thanks to a walk.

The Hawks were not going to go down without a fight. They showed a little bit of life in the bottom of the fourth, where they scored one run. Yadel Abreu came up to the pate as a pinch hitter and delivered, scoring Steven Torres who had gotten on thanks to a walk earlier in the inning. 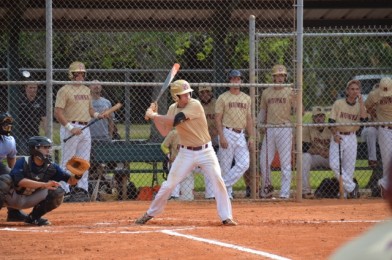 Dylan Carter had an RBI double in the bottom of the first.

Hawks manager Julio Mendoza was not happy with Friday’s loss, but gave credit to the Bison for playing well.

“We did not come out to play today,” said Mendoza. “They had a good day and outplayed us in the ballgame.”