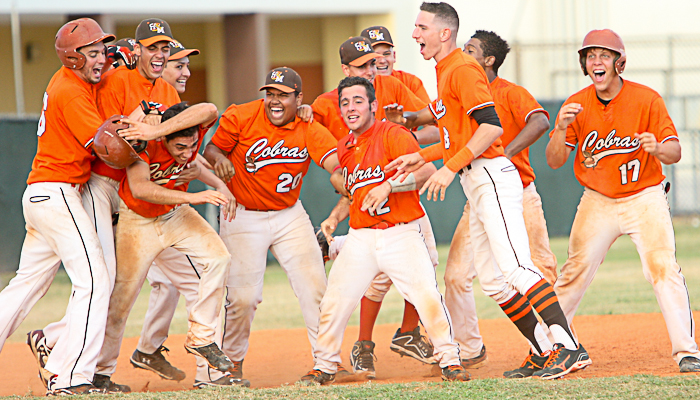 Leandro Lopez is mobbed after his walk-off single in the 11th.

South Miami lefty Deivis Jacomino threw an 11-inning complete game and Leandro Lopez made him a winner with a walk-off single in the Cobras’ 4-3 win over Miami Senior Tuesday afternoon in a 9A-14 game. The win snapped the Cobras’ six-game slide as South Miami improved to 4-9 overall and 2-4 in district play.

Jacomino scattered eight hits in going the distance. He struck out 12 and walked four.

“He’s the horse for us the whole year, one of the top pitchers right now in the district,” said Cobras manager Howard Cuervo. “He deserved to get the win. These kids practiced and worked so hard since January, they deserved to win.”

But it didn’t happen until two outs in the bottom of the 11th inning. Lopez slapped a fastball to right field, scoring Aaron Cox with the winning run.

“I was just looking to drive the ball the other way, go inside out, like my coach told me,” Lopez said. “I had opportunities earlier in the game and I missed it, but I kept fighting.”

Miami (3-9, 1-5) grabbed a 1-0 lead in the first inning on an RBI single from Gustavo Miranda, scoring Christian Torres with the game’s first run.

Lopez answered in the third inning, lifting a sacrifice fly to score Jered Rodriguez with the tying run. It was the Cobras’ first run scored in four games. They had been shut out in three previous outings and blanked in four of their last five games.

But the bats were alive on Tuesday. Cox launched a two-run double in the fourth inning to break the tie and give the Cobras a 3-1 lead. Rodriguez and Jorge Gutierrez scored the go-ahead runs. 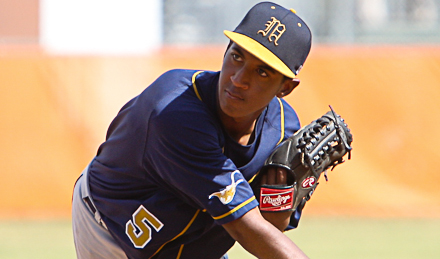 “We were fighting all the way to the end,” said Miami manager Frank Suarez. “But that’s baseball.”

Enrique Rivero put the Stingarees in position to take the lead in the sixth inning with a lead-off triple. But Jacomino coaxed a ground out to a drawn-in infield, then recorded a strikeout, and retired the side with a come-backer to the mound. He yielded a single in the seventh inning but did not allow another hit until a two-out single in the 11th.

Jacomino looked stronger as the game wore on. He struck out seven batters from the seven inning on. He said his fastball and curveball were working for him.

“I was just trying to throw strikes, pitch my game and do it for the team,” said Jacomino, who struck out the last batter he faced to end the 11th inning. “I put the little bit that I had left in the last inning. I was thinking this was my last inning.”