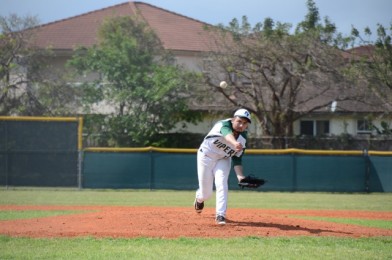 right-hander Franco Velazquez was strong in his outing, keeping Mater Academy under control.

Mater Academy traveled to Varela on Wednesday to face off in a nail-biter that came down to the bottom of the seventh. The lead changed a total of five times throughout the game, before Varela put it in the bag with one swing of the bat to walk-off with a 4-2 victory.

“We never gave up,” said Vipers manager John Barbato. “We made the plays and the pitches when we had to.”

Varela has now won three in a row, accounting for more than half of its wins for the season in the past two weeks. After a tough start to the year that saw the club’s new manager resign shortly before the season started and many of its players depart elsewhere, the club has rallied together to finish strong. Barbato returned for one more tour at the end of a 30-year career that includes coaching the past 13 seasons with the program, and Wednesday’s win serves as a small reward from the players who stuck with it to keep this club going this year.

The Vipers entered the bottom of the seventh needing just one run to win the game. Kory Hendon drew a walk that then brought up Tony Mejias to the plate. Mejias saw a pitch he could drive, and hit it well over the left field fence to end the game in a memorable manner.

“Before I stepped into the box, I analyzed the situation and visualized success,” said Mejias. “I was lucky to get a first-pitch fastball and was able to put a good swing on it.”

The first run for Varela (5-7) came in the bottom of the second. Anderson Garcia made contact for an infield hit to bring in Andrew Weiss, who had gotten on due to a walk earlier in the inning. Donovan Bossano had also walked and Hector Gomez had an infield hit of his own that inning, but the Mater defense was able to keep them in check.

The Lions (8-8) answered back quickly in the top of the third and tied the game. Luis Diaz started the inning off when he drove one deep to center for a double. Lewis Menendez then came up to the plate and ripped one into center, scoring Diaz. 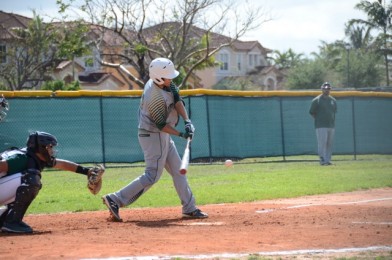 Joe Soto had a big double in the seventh to give the Lions a chance to tie the game.

“I was just looking for a pitch to hit,” said Menendez. “I got a good pitch and was able to hit it up the middle to score a run.”

The Vipers broke the tie in the bottom of the fourth. Jaymark Garcia started the inning with an infield hit that then led to a base hit up the middle for Hector Gomez. With men on first and second, Darian Munoz delivered a base hit to left, driving in Garcia.

The Lions were down one heading into the seventh inning. They did not lose hope, though. Mykanthony Valdez showed his speed and hustle with an infield hit to start off the inning. Joe Soto then drove one deep to left for a double, moving Valdez to third. In an effort to make a force out at any base, the Vipers intentionally walked Luis Diaz. Lewis Menendez then put the ball on the ground to allow Valdez to reach home safely.

But Lions’ manager Michael DiRosa did not like what he saw from his players overall. DiRosa knows that they must continue to work harder.

“We did not really do too many good things today,” said DiRosa. “We pitched well today, but we had too many first-pitch outs and we came out flat.”