Coral Park Rallies Past Miami Senior For 9A-14 Title 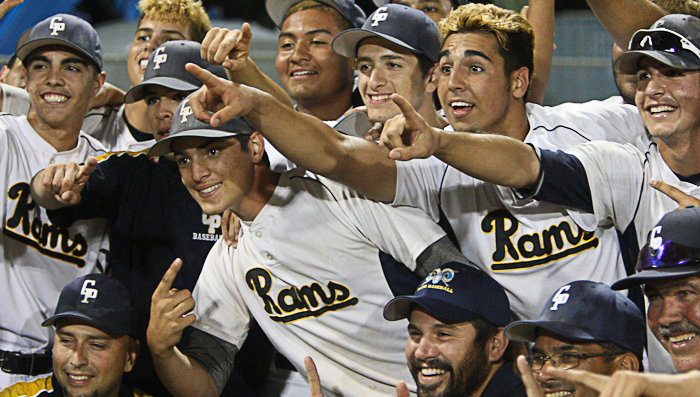 Coral Park celebrates after capturing the district title on Wednesday.

Coral Park rallied from a five-run deficit to win the 9A-14 championship with an 11-7 win over Miami Senior Wednesday night at Flamingo Park in Miami Beach.

Both teams advance to the regional playoffs next week.

Every starter in the Rams’ lineup scored at least one run, as they rallied from deficits of 2-0 and 7-2 to win the district title. Coral Park (18-8) scored nine runs over the final three innings, including a five-run fourth inning that tied the game at 7-7.

“We’ve been resilient all year, played a lot of close games throughout the season,” said Coral Park manager Juan Carnicero. “The kids were a little battle-tested, I felt, and we were able to do it again today when it mattered.”

The Rams broke the tie with two runs in the fifth inning and two more in the sixth to capture the championship crown. They sent 10 batters to the plate in the fourth-inning rally. Doubles by Emmanuel Montesino and pinch-hitter Roberto Rodriguez, and singles by Axel Gomez, Alex Gato and Erwing Hernandez highlighted the fireworks.

They added a pair of sixth-inning insurance runs on a two-run single by Bran Socorro, scoring Gomez and Robert Contreras who opened the inning with consecutive singles.

“It’s unbelievable,” Carnicero said. “It’s my third year back here. It’s been a long road, but we got here.”

Coral Park senior Paul Castillo went 2-for-4 with two stolen bases and a fifth-inning RBI triple that gave the Rams the lead for good. Castillo said he knew his team wasn’t about to give up after falling behind early.

“It’s as wild as it gets,” said Castillo, who is headed to Hillsborough Community College. “That’s how we do it. We come out, bring a lot of heart, bring a lot of hard work. It shows out on the field, all the hard work, all the time the coaches put in for us.”

Luis Vitier earned the win with five innings of relief work. Vitier allowed just four hits and one earned run. He struck out five and retired the final eight batters he faced to nail down the victory.

“I feel real good about this team victory,” Vitier said through an interpreter. “I knew my team wasn’t going to let me down and I was going to come in and shut them down.” 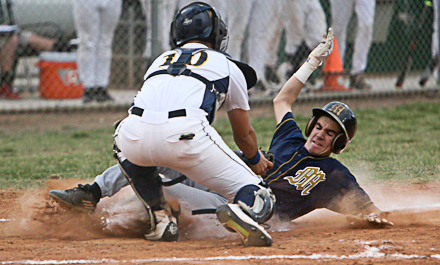 Miranda collected three of the Stingarees’ seven hits, falling a home run short of hitting for the cyle. He singled, doubled, tripled and drove in four runs. Javier Alvarez also added two hits and scored a run. But Coral Park had the answer.

“They did a good job, they stayed in the game,” Miami manager Frank Suarez said. “I give them a lot of credit.”

The Rams’ Erik Estevez added to the hit parade with a 2-for-3 night and a run scored, and Jose Rollins also scored a run.