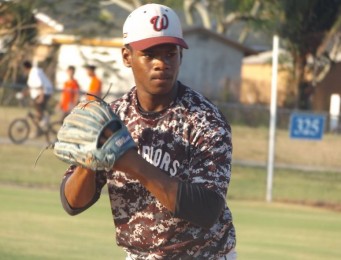 In a must-win game for his team, Warriors senior Aldrich De Jongh only allowed one run in a blowout win.

After entering the bottom of the second inning tied at 1-1, Edmond Americaan, Bertram Murray and the rest of the Warriors offense took advantage of errors to jump ahead with a big lead.

“The guys hit the ball hard and we had our ace Aldrich out there, and our guys have been hitting the ball really well as of late,” Warriors manager Miguel Cuello said. “When we do what we did tonight — hit the ball, move runners from first to third, get our bunts down — it’s hard to beat us. We just adjust and try not to get too big on our swings. I’ve been telling the guys all year that anytime you see an error, it’s time to capitalize. If a guy gives an opportunity to you, take it. In the innings that they were sloppy, we took advantage with a base hit and by opening the gates, we get to score two or three runs, and it’s hard to beat us when we’re on our game like that.”

After de Jongh struck out the side in the top of the first. In the bottom of the first shortstop Xavier Edwards drew a walk and stole second immediately after. With Edwards now in scoring position, right fielder Edmond Americaan lined a single to give his team a 1-0 lead.

In the top of the second inning, de Jongh ran into trouble when left fielder Luis Rodriguez led things off by reaching on an error. In the next at-bat, first baseman Joyrick Suero tied the score with an RBI double, before being thrown out at third. That was the last mistake for de Jongh (9-0), who struck out the next two batters. 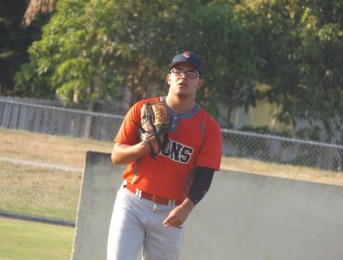 Luis Garcia got the start for the Lions and threw into the fourth inning.

“We came prepared for the game and whatever we did for this game paid off,” de Jongh said. “We kept going hard and I felt really good with my slider. I felt very comfortable also because the guys were really prepared and came through for me on the mound. We didn’t hit in the first inning but I knew we were going to bounce back.”

Bounce back the Warriors did as, the offense rallied for three runs in the bottom of the second. After Jerseley Cicilia reached on an infield hit and advanced to third on a single from Jowenrick Daanjti, Edwards again came through, this time giving the Warriors a lead they held for the rest of the night. Both Daanjti and Edwards touched home plate just seconds later after Americaan hit an RBI double.

The Warriors continued to score, adding one in the bottom of the third and five in the fourth before the game was called due to a mercy rule after the top of the fifth. Both of these innings were highlighted by the Warriors taking advantage of numerous opportunities handed their way by the Lions defense.

“This gives us a lot of confidence, but I keep telling our guys that we’re going to keep playing teams that we haven’t played,” Cuello made clear. “Whatever the scouting is, we have no idea until they get here. You can do as much scouting as you want but when you’re in the game, the scouting just rolls off the mind because you don’t know who’s pitching, how good they are, how they adjust. We talk every inning and I tell our guys — even the guys who aren’t playing, but are still part of the team — to be loud from the first pitch to the last pitch. I want our guys to get involved.”