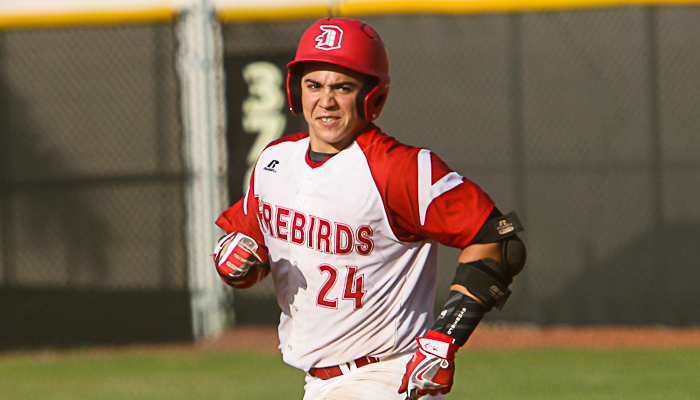 Doral’s Christopher Calero rounds the bases on his walk-off homer.

Doral Academy sophomore lefty Jorge Perez threw a masterful game and fellow sophomore Christopher Calero punctuated the HSBN Miami-Dade Game of the Week by delivering a seventh-inning walk-off home run, as the Firebirds turned back visiting Brito 3-2 Friday afternoon in a non-district game at Douglas P. Rodriguez Field. Calero hit the first pitch he saw leading off the bottom of the seventh inning in a 2-2 tie as the Firebirds, the No. 14 team in the Miami-Dade Power Rankings, improved to 14-7 for the season.

Even though he hit it well, Calero said he still didn’t know initially that it would clear the fence.

“I had an idea, but I wasn’t really sure,” Calero said. “That net’s pretty high out there, so I wasn’t sure. I hit a couple in batting practice and I thought they were out and they hit off the top of the net.”

Calero said his initial thought was to be quick out of the box and leg out a double. But he said that about halfway down the first base line he could tell it had cleared the fence, netting and all.

Perez struck out a career-high 11 over six innings of work, limiting the Panthers (11-6) to just one hit. 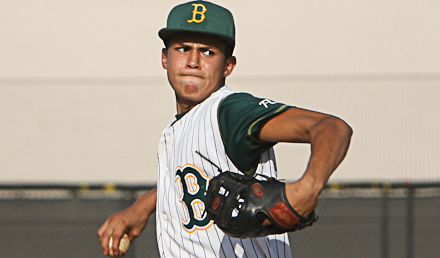 Perez kept Brito hitters guessing with an array of pitches.

“My curveball was really good today,” Perez said. “I was getting people off balance with my changeup after my fastball. My changeup is one of my go-to pitches. When I throw it I get most of the batters off balance.”

A third sophomore, righty Victor Cabrera, picked up the win with an inning of relief.

Sophomores are considered older statesman around Doral Academy. Nine sophomores lead the 15 underclassmen on the squad, which has just five seniors. To say the least; three players on the roster aren’t even freshman yet.

“This is a very, very young team,” said Firebirds Manager Ralph Suarez. “I have the best coaching staff in the country and they have done a tremendous job this year. We’ve had to be really patient to coach these guys because we’re so, so young. The future is bright here.”