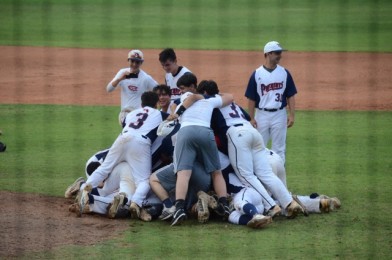 The Florida Christian Patriots Celebrate After Winning The District Championship

“It hasnt been easy for us and we did not expect it to be easy today, and it was not,” said Patriots manager Chris Brigman. “We have all the respect for the Warriors and it is not easy getting past that team”.

The Patriots began early, scoring two runs in the bottom half of the first inning. Ruben Someilan started the inning with a walk before he stole second. Cristian Martin got on base after a fielders choice to third resulted in Someilan being safe at third. Robert Fabelo then took a pitch to the back, that led to another hit by pitch to Christian Coipel that scored Someilan. The second run came in the inning with a walk to Willy Hernandez that scored Fabelo. Their third run came in the bottom of the fourth with a solo home run by Alex Cerda.

The Warriors responded quick with a run of their own in the top of the second inning. Alvaro Valdez ripped one into center for a stand-up double that then led to a single to left by Michael Arencibia to score Valdez. They then cut the lead to just one in the top of fifth when Clinton Gulley hit a solo home run.

Florida Christian did most of its damage in the bottom of the fifth, where the Patriots scored six. The inning started off with a hit by pitch to Martin and back-to-back singles by Fabelo and Coipel, which scored Martin. Hernandez then came up to bat, and shocked the Warriors defense with a bunt, which resulted in a hit to load the bases. Two walks scored two more runs for the Patriots.

The Warriors then made a great defensively play by turning two with a home-to-first play after a ground ball to the pitcher. Someilon created more of a gap on the scoreboard with one swing of the bat. He drove one over the outfield fence for a three-run homerun, ballooning the lead to four. 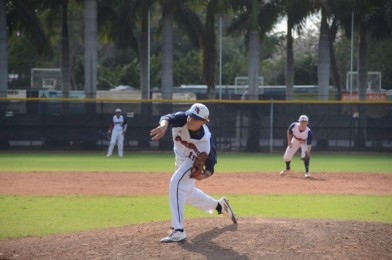 “I came up with men on third and second and my main objective was to get the ball into the outfield,” said Someilon. “I saw a good pitch and just cranked it.”

In their last effort to tie the game, the Warriors showed some hope in the sixth. Anthony Vilar led off the inning with a walk before Luis Aviles drove one for a double to advance Vilar to third. Jakob Zarello then got on base due to an infield error that scored Vilar. Later in the inning, Valdez singled to right, bringing Valdez in to score.

The Patriots, however, were able to stop the damage there.

“The bottom line is that we have to execute,” said Warriors manager Emil Castellanos. “At this point in the season, we cannot walk as many batters as we did and expect to be in the game, especially against a good team.”