Hialeah Gardens Rallies For 9A-13 Title In 10 Innnings 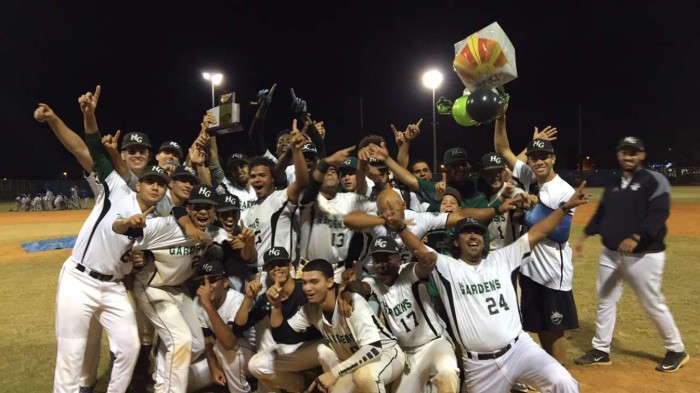 Hialeah Gardens won its first district title in four years as it rallied for two runs in the bottom of the tenth inning to top Hialeah 4-3 for the 9A-13 championship.

With Hialeah ahead 3-2, the Gladiators (17-6) led off the bottom of the 10th with a groundout, followed by a walk to Allan Berrios. Johnathan Sosa singled to left and, two batters later, Levis Aguila doubled to left to score Berrios to tie it at three. Arthur Cordovez was intentionally walked, and then Lazaro Morales walked, allowing Sosa to score for the winning run.

Sosa went 2-for-4 with a run and Aguila finished 2-for-5 with two RBIs.

The Gladiators last won a district title in 2012 when it beat Hialeah. Since then, the Gladiators have bowed out in the district semifinal, losing to Hialeah two out of the past three seasons. Now, they move on to host a regional quarterfinal at 7 p.m. Wednesday against Miami Senior.

With the score tied at 2-2, Hialeah scored in the top of the 10th. John Venegas singled to lead things off before Johnathan Sanchez dropped a bunt single to move courtesy-runner Rahman Allen over to second. Kevin Barreneche moved the runners over, and then Erick Semancas grounded out to score Allen for the go-ahead run. A fly out ended the threat.

Hialeah Gardens took a 2-0 lead in the bottom of the first. Nathan Llanes walked and then came home on Aguila’s double. Arthur Cordovez singled in courtesy runner Anthony Baez.

Andres Rivera allowed one hit in four innings in relief of starter Cordovez.

“It feels great to bring a district title back to Hialeah Gardens, especially given the competitiveness of the teams in our district,” Burgos said. “Today’s game was earned, not given. I’m very proud of our guys and we are looking forward to regionals.”